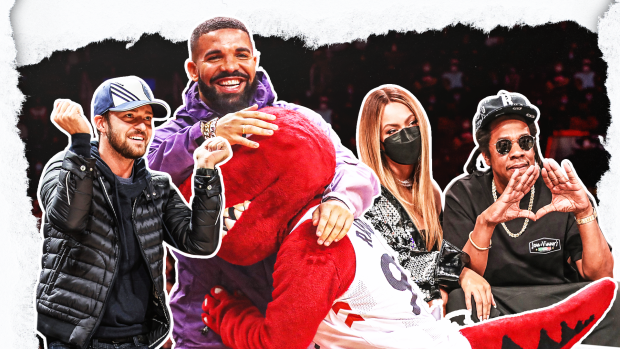 The sports industry and the music industry are two worlds that collide often. In fact, in terms of entertainment, there may not be two industries more symbiotic than sports and music.

Sports references are constantly referenced in lyrics from the world’s biggest artists, and the sports watching experience would be half as fun without the addition of walk up songs, goal songs, break-in-the-action music, and other various integrations. Both industries feature big-name superstars, real life drama, and the ability to entertain thousands each and every night.

The crossover doesn’t end there, though. There’s a lot of mutual admiration between the masters of their respective domains, with athletes looking up to musicians, and musicians looking up to athletes. In this piece, we’ll take a look at teams currently competing in the NBA Playoffs, and the big-name musicians that will be cheering them on.

The Atlanta Hawks have a ton of support from the city’s rapidly evolving hip hop scene.  A few rappers that have pledged their allegiance to the Hawks include 2 Chainz, Lil Jon, and Quavo.

2 Chainz is probably the celebrity fan most invested with the Hawks. In fact, he even has skin in the game. Back in 2019, 2 Chainz joined the ownership group for the College Park SkyHawks – the Hawks G-League affiliate.

We’re going to need some help on this one. While we can find a handful of celebrity fans (Matt Damon, Ben Affleck, Eliza Dushku, Donnie Wahlberg, Christopher Mintz-Plasse, Dane Cook, Conan O’Brien), none of them seem to be from the music world.

Are we safe to assume huge Bruins fans and Boston icons in the Dropkick Murpheys could count? Maybe, maybe not, but they were once upon a time the motivation for Kobe Bryant to dominate the Celtics.

Kobe looks ahead to final game vs. @Celtics in Boston, reflects on @DropkickMurphys, too: https://t.co/Uw5JbyptP0 pic.twitter.com/qvJUz6OW5O

We’re going with one man, and one man only. He’s the obvious choice, being a former shareholder with the team.

Jay Z. In fact, we can put Beyonce in here as well. Two of the biggest legends in the music industry and one of the most powerful couples in the world – nobody else even deserves a mention compared to these two.

The Chicago Bulls are another one of those legendary teams that play in one of the league’s biggest cities. They are one of the most iconic teams in history thanks to a torrid decade in the 90’s, and they’ll always be the team associated with one of the game’s greatest players in Michael Jordan.

It makes sense that they would be a popular team amongst creators in the music industry.

While there are a number of ways this could go, there are two musicians that stand out as Chicago basketball representatives: Kanye West and Chance the Rapper.

Both rappers make a number of basketball references in their music, and both are proud Chicago natives as well. Chance (who is also a known Bucks fan) even performed at the NBA All-Star Game when it was hosted in Chicago back in

Chance the Rapper Performing Ultralight Beam with an Orchestra at the NBA All-Star Game pic.twitter.com/d0rVYFEExg

Kanye, on the other hand, even stated in ‘City of God’ that he was going to buy the Bulls and hang with Michael Jordan.

Kanye West just said he intends to buy the Chicago Bulls in his new song “City of Gods” 👀 pic.twitter.com/Yyg0dkU0Cf

Probably the biggest musical fan of the Mavs would be Jamie Foxx. While Foxx is known for his work on the big screen, he’s also had a heavy impact on the music industry with 8 Grammy nominations, including one Grammy win.

The Texas native is also a big Mavs fan! He was even given a ’10-minute contract’ by the team, apparently, and he’s been seen shooting around with the Mavs stars on multiple occasions.

Honourable mention goes to P Diddy (or Sean Combs) who allegedly designed what has proven to be one of the most iconic Mavs jerseys to date.

The @dallasmavs debuted these Alternate Uniforms during the 2004-2005 season, they incorporated the green and blue of the team's original road jersey from 1981!

& guess what, they were designed by hip-hop mogul @Diddy! 😳🔥

The Nuggets are another team that don’t have much of a presence amongst the music community. While South Park creators Trey Parker and Matt Stone represent celebrity fans, with Denver Broncos legends Von Miller and Peyton Manning also showing up courtside, there simply aren’t many musicians that call the Nuggets their fave.

Perhaps with the rapidly developing dominance of Nikola Jokic, some musicians will be influenced to push their chips in on the Nugs.

The Golden State Warriors have had a ton of bandwagon support through their dynasty years, including a lot of courtside celebrities. While a team as successful as the Steph Curry Warriors are bound to attract attention, one musician stands out as the most consistent Warriors fan: Carlos Santana.

Santana has been a fan of the Dubs for a long time, and he even played the national anthem ahead of Game 2 against the Cleveland Cavaliers in the 2017 NBA Finals.

Easy, peasy, lemon squeezy – Justin Timberlake is the musical representative of the Grizz.

JT is a Memphis native, and he’s now also a minority owner of the team. While the Grizzlies have long been considered a smaller market team, JT’s presence gives them more of a larger-than-life feel.

Miami is heavily integrated into the music scene, so it’s no surprise the Miami Heat carry some musical celebrity fans as well. There probably aren’t any two musicians as closely associated with the team than Jimmy Buffet and Rick Ross.

They also could not be more different in terms of musical style.

For your entertainment, we present you one of the funniest ejections in NBA history.

Hell even Heat/Knicks at Miami Arena. Remember when a Ref threw out Jimmy Buffet out of game for arguing calls? That's what I'm talkin bout.

That’s not to take away from Rick Ross’ fandom.

“This is a special group of youngsters, we got a lot of history to make.”@RickRoss is all in on the @MiamiHEAT this season 🔥 pic.twitter.com/DVYB2LQUik

Only one fan to mention here.

Gucci Mane emerged as the Milwaukee Bucks representative in the music world during the 2019 playoffs when he notably squared off against Drake in some courtside Tom Foolery. The two could constantly be seen trolling opposing players, and apparently they even had a little wager on the series.

You know, a little 6-figure wager.

Believe it or not, the T-Wolves don’t have much in the way of celebrity fandom either. Saying that, there is one musical legend that is enough to qualify the team into this article regardless.

The late great Prince was a basketball fan, and the T-Wolves from his native Minnesota were his team of choice. In fact, he even attempted to buy them once as part of an ownership group that also consisted of Magic Johnson and Janet Jackson.

For what it’s worth…

The Pelicans are essentially celebrity fanless, but Lil’ Wayne has shown some love to his hometown team. Weezy is an openly passionate Los Angeles Lakers die-hard, but he’s the only musician we could find with any affiliation with the Pels.

Will Smith has long been a proud supporter of all things Philadelphia, and the 76ers are no forgotten part of that. In fact, Smith and wife Jada Pinkett Smith became majority owners of the team last year, officially making them Mr. and Mrs. 76ers.

He also wrote one of the most famous sing-along songs of all-time, the beginning of which announces he grew up in West Philadelphia playing basketball. You know the tune.

While Smith was the obvious choice here, we also need to give a shoutout to Meek Mill. What Drake is to the Raps, Meek is to the Sixers, and the two rappers have not been shy about going after one another in the way Raps fans and Sixers fan are known to do.

Admittedly, we did not know this going into the article, but rock-and-roll icon Alice Cooper is a longtime fan of the Phoenix Suns. He can often be seen watching his team courtside, and he’s even performed live at Footprint Center during halftime of Game 5 against the Clippers.

Alice Cooper switched up the lyrics to School’s Out for his halftime performance for the Suns pic.twitter.com/RQjLsoE4qY

We don’t need to tell you this, you already know. Drake is not only the most recognizable celebrity fan the Raptors have (Nav a close second), he’s also the Raps official brand ambassador.

From OVO, to player relationships, to chirping opponents from his familiar courtside seat – Drake is ALL things Raptors.

There was no way @Drake would miss the @Raptors' championship parade. 🏆 pic.twitter.com/xhJVziGBLh

"I want my chips with the dip!"

1 year ago today, Drake’s post game interview after the Raptors won a championship 😂

More recently, that’s meant he’s had to take some shots as well.

If you didn’t know any better, you may think that the Utah Jazz would be one of those teams unlikely to have a celebrity fan.

You would be right, sort of.

Macklemore is clearly a huge fan of the NBA, and he can often be seen repping various jerseys while performing. One particular moment directly associated him with the Jazz, when former Utah shooting guard Gordon Hayward tweeted a thank you for wearing his jersey in a photo taken for the Rolling Stone.

Shout out to @macklemore for reppin the hayward jazz jersey in the @RollingStone magazine pic.twitter.com/p5Fov2U954

From there, Macklemore’s affiliation with the team grew. While we can’t make the determination that the Jazz are his #1, he’s definitely the celebrity musician most directly linked to the team.