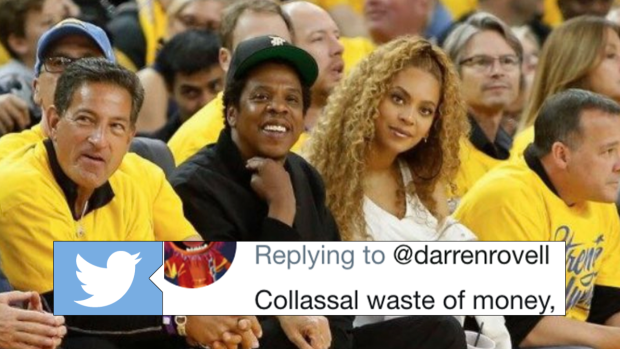 Buckle up basketball fans because we've got a series!  Sunday night, the Warriors evened the NBA Finals with the Raptors and now they head back to the comfortable confines of Oracle for the next two games with a lot of momentum on their side.

As was the case in Toronto, the hottest ticket in sports right now is for the Finals and if you're hoping to get into Oracle for Game 3 or Game 4, you better be willing to spend a nice sum of money or a record amount like this person.

Your eyes are not playing tricks on you.  That is over $50,000 a ticket, a new per seat record for the Finals.

Collassal waste of money, no matter how much you have.

Absolutely insane.  And speaking of insane, if you thought the amount of big names in Toronto for the first two games of the series was nuts, just wait until the series starts in the Bay Area.

Looks like Kevin Durant may have stared down Rihanna after that 3-pointer pic.twitter.com/Lkf3SEQ14Z