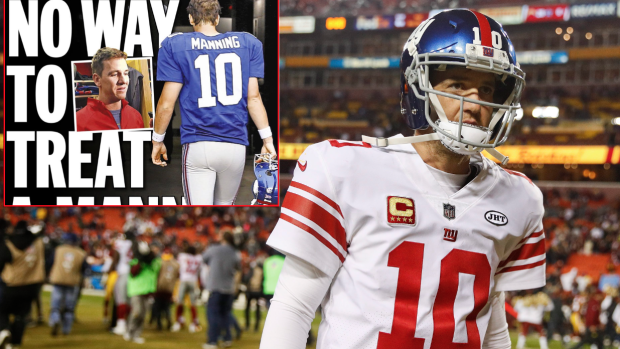 On Tuesday, the Giants may have officially ended the Eli Manning era as they announced Geno Smith would be starting at quarterback Sunday against the Oakland Raiders.

WATCH: Eli Manning reacts to the announcement that he will not start on Sunday pic.twitter.com/nQoPEcfTl3

The decision was shocking to say the least and it caught the football world off guard as many former players and teammates of Manning had some harsh words for the Giants organization.

All you hear is how classy the NYG organization is and then they pull a move like this. Eli Manning helped win them two Super Bowls. It’s not like they’re playing for something this year. Let the man finish the season out and then do what you have to do. Show some respect

Once a Giant, always a Giant, but the way the Giants treated Eli Manning today is resonating deeply with players from SB 42 and 46 who won with Eli. Will the relationship between team and these players ever be the same? These guys love Eli.

Wow so Eli Manning get benched. Is it me or is #BenMcAdoo running out of ppl to throw under the 🚌 Bus. He's like a student who didn't study for a test but keeps saying the teacher just doesn't like me. No Son you failed yourself. Str8 donkey #facts

Tom Coughlin on @1010XL asked about Eli Manning: "Surprised is not the word. My sentiments are totally with Eli Manning. ... He's a class act, a two-time Super Bowl champ, one of the finest, most humble men in that locker room. ... I was very upset about when I heard that."

This story is huge and will be for the foreseeable future, especially in New York, and on Wednesday the tabloids took shots at the Giants with their covers:

Tomorrow's cover: Eli Manning has only one move after the Giants’ disgrace https://t.co/Y775YfV1UC pic.twitter.com/WcEg3WAMcQ

Today's back page: Eli out, Geno in, streak over. And with Manning's @Giants career likely done, there's plenty of blame to go around https://t.co/aEUgk5YoDK pic.twitter.com/BBo5XujXzb

The @Giants are closing the book of Eli

If (and probably when) Geno Smith and Davis Webb struggle Sunday, expect even harsher criticism of the Giants to come.