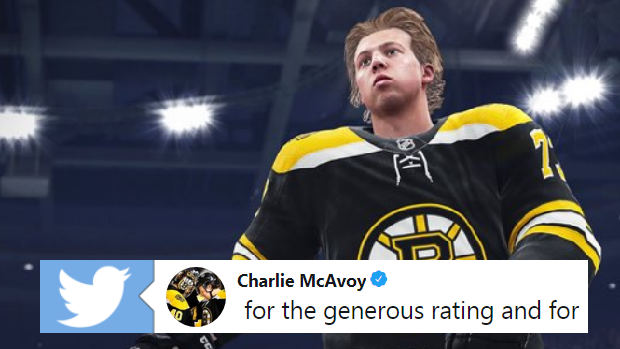 Charlie McAvoy is feeling grateful after finding out what EA Sports slapped him with for his NHL 19 rating.

The company has gone on a spree over the past couple of days, slowly but surely revealing the majority of the league’s players. After discovering he received an 85 in his player card, McAvoy was more concerned about what his hair looked like in the game rather than the rating itself.

Thanks @EASPORTSNHL for the generous rating and for giving me sick flow. Can’t wait to play the game #NHL19Ratings pic.twitter.com/9dK5hB2r5L

The guy does have some pretty sick flow.

@noelacciari is officially off the market. Congratulations to you and @kate_chisholm on tying the knot. Thanks for having us there on your special day ! #NoelDozer #noeltakesthekate

Whereas McAvoy’s hair was designed pretty accurately by the game, fans seemed to think EA dropped the ball on Patrik Laine’s beard. Was it really this nice?!

At just 20 years of age, McAvoy should be more than happy with both his rating, and the flow that the generous graphic designers at EA decided to give him. It’s just too bad they left his beard out of the equation.

Now, you will go to sleep or I will put you to sleep. Check out the name tag. You're in my world now grandma #Hal #DarkJeter