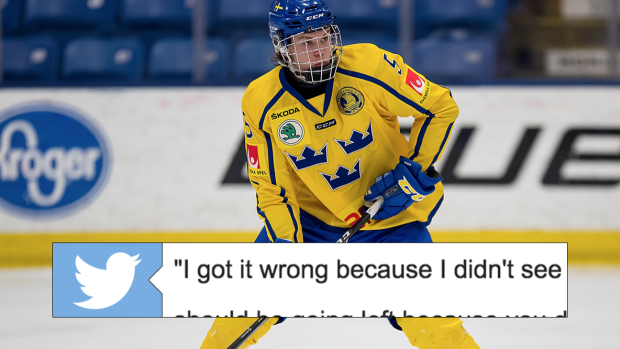 The NHL combine is an important event for any prospect hoping to improve his draft stock.

The physical testing is one way prospects can improve their draft stock, but the meetings with teams are just as, if not more important, as a prospects have a chance to talk with the people responsible with making the picks come draft day.

During these meetings, players can be asked a variety of questions.  Some might be related to hockey, while others may not and this weekend at the NHL combine, defenceman Filip Johansson revealed the odd question he was asked by a team, as per NHL.com:

Defenseman Filip Johansson of Leksand in Sweden's junior league said he was confused when a team showed him a picture of a bus and asked him which way the bus was going.

Johansson, No. 10 in Central Scouting's final ranking of International skaters, said that because the front and the back of the bus looked identical he took a guess. He realized later that he gave the wrong answer.

These odd questions serve a purpose, but the last thing a prospect expects to come up in a meeting with a team is a question about which way a bus is going.

Johansson can at least take solace in the fact that he's not the only prospect in any sport that's been faced with an odd question while meeting with a team and he won't be the last.

.@CanesFootball TE @David_Njoku80 is New Jersey native but figuring out his exit proved tougher than some #NFLCombine questions he faced. pic.twitter.com/AToUUd5ah4