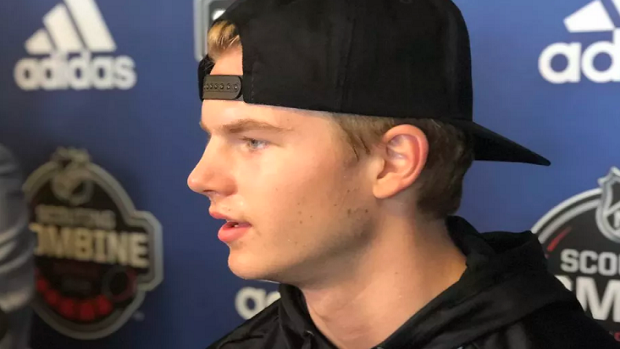 Is this a trick question? , Photo via Twitter/Scott Matla

The NHL season is winding down, but opportunities for potential draftees to the league are just heating up.

The Draft Combine for the 2019 Draft class just wrapped up, and the players experienced very intense physical testing, but also, experienced some pretty intense, and rather bizarre mental testing in the form of team interviews.

The front office of teams will often meet with players at the combine, and some teams took the chance to ask some pretty hilarious questions to the budding stars.

After all, you want to know someone before you draft them, right?

The Montreal Canadiens played a little bit of a mind game with one question, asking Thomas Harley to ponder a Rubik's Cube of a inquiry.

“Montreal asked if I would rather be better than everyone else or the best”-Thomas Harley #Habs have all the fun questions this year I guess pic.twitter.com/tQ15D4pwwk

Honestly, we’re not sure what we’d say here. The best, we guess? But we also want to be better than everyone?!

According to NHL.com, another rather interesting question was asked to Harvard commit John Farinacci.

"There's a 50/50 chance of a 20-foot python who hasn't eaten in five months is in the hallway," Farinacci said. "There's five of us in this room. Which one's going out there?"

Farinacci answered the question with grace and the perfect amount of hockey.

"I think it almost relates to the ice a little bit, sacrificing for your teammates," he said. "The message [the team official] tried to get across was basically if you're a leader you go out there and there happens to be a snake, what are we going to do? You work your way around it, you communicate with everybody beforehand, figure out the plan if there is a snake out there."

Honestly, that’s a better answer than we would have given. If there’s a 50% chance of there being a python in the hallway, there’s a 100% chance you can find us jumping out of the window.

These questions are pretty crazy, but according to one prospect, they weren’t the most daunting part of the interview process.

Alexander Campbell said one of his tougher interviews was Montreal, but for a peculiar reason:

Apparently, it was the pythons on some of the team officials asking the questions that were more intimidating.