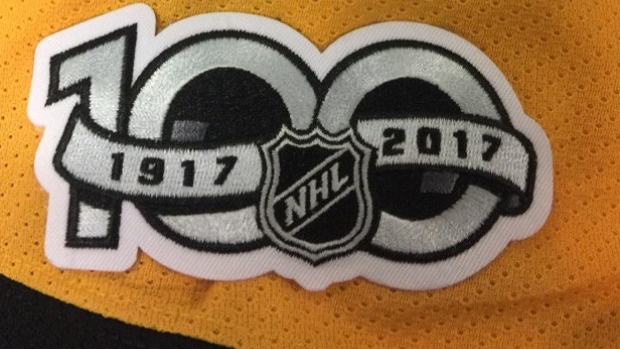 With the calendar flipping over to 2017 the NHL has officially entered its 100th year in existence.

The Maple Leafs and the Red Wings helped drop the puck on the centennial celebration on Sunday, playing out a highly entertaining outdoor game on New Years Day that saw Auston Matthews score an OT winner. Both teams sported a special centennial patch for the game, and now the rest of the league will follow suit and do the same. The Centennial Classic wasn't the only game on the calendar on Sunday with the Capitals battling the Senators and the Flyers taking on the Ducks. All four teams donned the new patches on the right sleeve, just below the numbers.

The inclusion of the special patch on every team's jersey is definitely a welcome addition, but we can't help but think that it would look even better if it were placed somewhere on the chest instead. It looks a little too tucked away in our opinion. As the head equipment manager of the Penguins, Dana Heinze, stated in a tweet, the decision of where to place the patch was up to the league not the teams.

Starting this month all the teams will be wearing a 100 year centennial patch. The league mandates where we wear it. pic.twitter.com/zfSfJ48uKZ

For the celebration of the NHL's 75th season back in 1992 teams had the commemorative patch placed on their right shoulder, which looked pretty sharp.

I guess we could get used to the patch being on the sleeve, though...