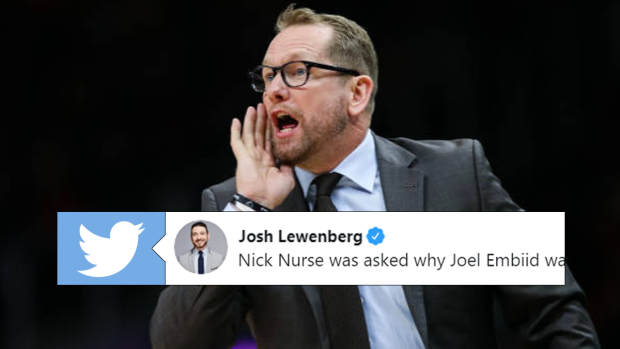 The Toronto Raptors are preparing for their second meeting of the season with the Philadelphia 76ers. When the two teams clash on Sunday, Sixers star Joel Embiid will be searching for his first point against the Raps this season.

In their first meeting, the Raps held Embiid to 0-for-11 for a big zero in the points column. It is the first time in Embiid’s career that he failed to score a point, but it’s not the first time the Raptors have shut him down.

In fact, here is a look at his point totals from each of the playoff games the two teams played in 2019.

If you take out Game 3, Embiid only averaged 15 points in the series. That is extremely low for a man that sometimes seems like a man playing in a boys league in the NBA.

So what was it about Game 3 that allowed Embiid to go off?

Nick Nurse was asked why Joel Embiid was so effective in Game 3 of last spring's playoff series, the one game in which he really went off...

Nurse: "You mean the airplane game?"

Translation: It doesn’t matter. It was the outlier, not the norm.

“The Airplane Game” refers to the airplane dance Embiid was doing. Raptors fans – including Drake – didn’t let him forget it.

Raptors fans trolled Joel Embiid's airplane celebration when he checked out of Game 5.

...Even Drake got in on the action ✈️🤭 pic.twitter.com/SXCAFOFVx8

Essentially the airplane dance became a way to mock Embiid, and he likely wishes he’d never done it at all. Make sure you tune into TSN to see if the Raps are able to shut him down once again, and whether there will be any airplanes will intrude on Wells Fargo Center.