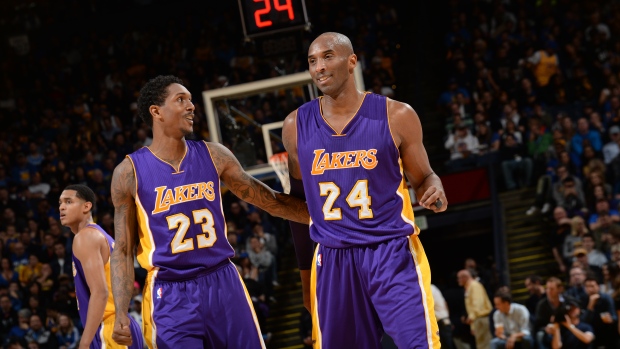 There probably aren’t any NBA players that weren’t influenced by Kobe Bryant in one way or another, and much of his mythic status came from his competitive drive. We’ve heard many of the stories before, of how Kobe would push himself as well as his teammates, but there are of course many more.

It might be hard to remember now, but in Kobe’s final NBA season during the 2015-16 year, the Lakers were a dreadful 17-65 team. Kobe didn’t take this so well! Lou Williams and Nick Young, who were teammates of Kobe's in the final season of his career, paid tribute by recalling some classic stories from that year on Twitter.

On Sunday, Kobe and his daughter Gianna were among the nine victims of a helicopter crash in Calabasas.

I just seen you man and you was talking about the broke thumb story lol crazy ass didn’t believe me but I tell everybody you was the first person to check up on me before surgery and after. I told him imma tell the story of him throwing my shoes in the trash next and he laughed

We got blew out in Portland. He took everybody Kobe’s and said they couldn’t wear it cause we was soft 😂😂

In the replies, somebody else shared another Kobe story that Williams recently told on a podcast appearance. (NSFW language follows.)

I was cracking up when you told this story Lou. 💔 pic.twitter.com/RGBSqlazyU

So many players around the league have their own Kobe stories, whether as a teammate, competitor or mentor, and it’s difficult to consider just how many players he was able to impact throughout his career.

One of Kobe's longest-lasting peers in the league, Vince Carter, spoke emotionally about his old friend and recalled a story from their last game against each other.

Vince Carter shares his favourite Kobe moment and says Bryant was happiest off the court with his family. ❤️ . (🎥: @sportscenter)