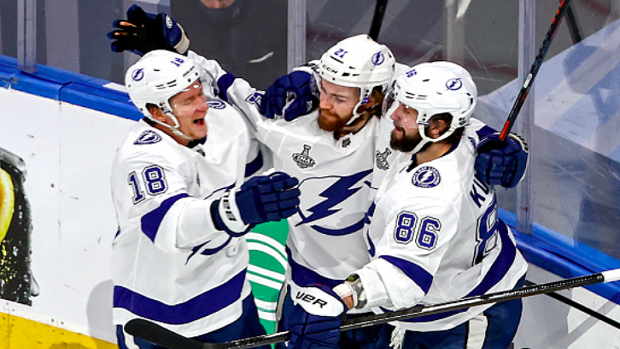 The Tampa Bay Lightning and the Dallas Stars went to the second intermission of Game 4 locked in a 3-3 tie.

Tampa Bay’s first two goals of the night came courtesy of Brayden Point, which helped him join his teammates Nikita Kucherov as the only two players in the postseason with 30 points or more. While it seems like that’s something that happens every year, it isn’t.

Did You Know? @86Kucherov and @BraydenPoint19 are the eighth set of teammates in NHL history to each record 30+ points in the same playoff year.#NHLStats: https://t.co/kXHwPoYq5d #StanleyCup pic.twitter.com/DwTeva9a22

It’s the first time since 2009 and just the second time in 25 years that a duo has accomplished such feat, and they joined some legendary company on the list. Out of all the teams to have a duo put up 30 points or more in the NHL playoffs, only one failed to win the Stanley Cup and that was back in 1983.

On top of that impressive feat, Nikita Kucherov set the record for most assists by a winger the NHL playoffs with his second helper of the night.

The only thing that would make this run sweeter for Kucherov and the Lightning is taking home the Stanley Cup.