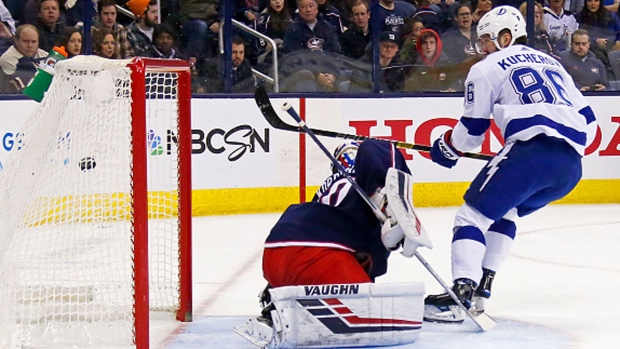 With 22 games to play in the regular season, Nikita Kucherov is now one point away from eclipsing the 100-point mark for the second straight season.

The 25-year-old factored in on every goal in the Lightning's 5-1 win over the Columbus Blue Jackets, finishing the game with two goals and three assists to give him 99 points (29 goals, 70 assists) in 60 games on the season. Kucherov tied his personal best of five points in a single game while setting the Lightning's single-season record of assists in 70, passing Brad Richards and Martin St. Louis' record of 68.

With the victory, the Bolts now tied an NHL record with the most amount of points at the 60-game mark.

The @tblightning keep on winning.

Here are some other impressive milestones and noteworthy stats from the game.

⭐@86Kucherov had multiple points in all three of his games, leading the @TBLightning to a perfect week. Kucherov had consecutive games with 4+ points for the 2nd time this season – the only two such instances in franchise history. #NHLStats pic.twitter.com/AEj5QXPZsq

Since 1990-91, there have only been seven instances of a player hitting the century mark through their team's 60th game. #NHLStats pic.twitter.com/LRt2YcBDI4

Thanks to 3 helpers in tonight's @TBLightning win, Nikita Kucherov has recorded the fewest team games (60) for a player to record 70 assists in a season since 1995-96 (Mario Lemieux- 59)