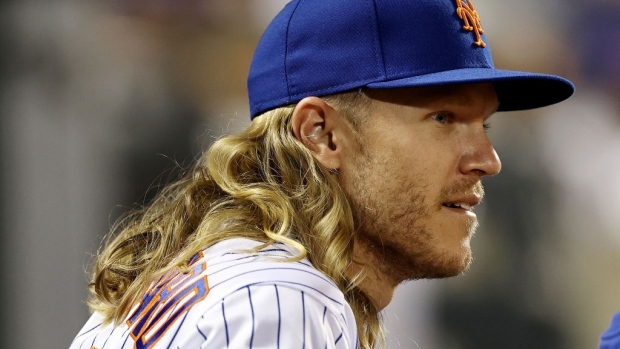 Newly acquired Angels RHP Noah Syndergaard had a few words for Astros shortstop Carlos Correa, following a comment he made about Yankees icon Derek Jeter on a Spanish podcast.

Correa, who had just won both his first Gold and Platinum Glove this past season, sat with a Spanish podcast and stated that “Derek Jeter didn’t deserve any of the Golden Gloves he won.”

Carlos Correa: "Derek Jeter didn't deserve any of the Golden Gloves he won".@RicardoGibbon

We mean, damn. Those are some pretty big claims that we’re positive Yankees fans especially did not like.

And even though Jeter himself let the comments slide under the rug, Syndergaard definitely didn’t appreciate Correa’s claims, stating how he’d love to strike him out while during an interview with MLB Network.

“I don’t know how my name came up… It doesn’t even warrant a response.”

In other words, Derek Jeter does not care what Carlos Correa has to say about him pic.twitter.com/1Tl7MWgUa3

“Not just for the obvious reason, but just what he said about Derek Jeter not deserving his Gold Gloves. I think that was a little ridiculous to say.”

Los Angeles Angels right hander Noah Syndergaard appears to have a bone to pick with Carlos Correa after the shortstop said Derek Jeter didn't deserve any of his defensive accolades.#GamblingTwitter #MLB pic.twitter.com/Nbx7JqyjCk

We mean, if this rivalry doesn’t make you excited for next season and counting down the days, we don’t know what will!