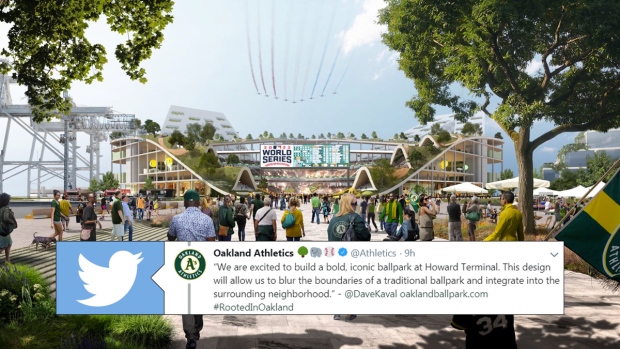 The Oakland-Alameda County Coliseum opened in 1966 and has been the home of the Oakland A’s since 1968, but the franchise is getting a little closer to moving to a brand new home.

On Wednesday afternoon, the A’s revealed their plans for the new ballpark they plan on building at Howard Terminal and it’s a major upgrade from their current ballpark.

The ballpark at Howard Terminal returns the baseball experience to the roots of the sport, while reimagining the ballpark anew. A “ballpark within a park,” the intimate stadium is nestled carefully into its urban surroundings. https://t.co/vLuiX01aT0#RootedInOakland pic.twitter.com/ZjTXknlU1A

The Athletics’ new ballpark, which is set to open in 2023 if all goes as planned, which have picturesque views toward San Francisco, the Port of Oakland and the Bay Bridge, and will basically be a ballpark within a park.

On top of the brand new stadium, the Athletics plan on putting the current Oakland Coliseum site to good use once the team relocated down the street with preliminary plans including substantial new housing surrounding a large park that will include affordable housing, a skills centre, a community gathering space, office and retail developments and restaurants.

We also plan to pursue a second project to redevelop the Coliseum site. There, we seek to transform the current site in ways that will address several specific community needs and opportunities expressed by East Oakland residents. https://t.co/vLuiX01aT0 #RootedInOakland pic.twitter.com/qyAaffvR2F

The new park will be anchored by the two focal points of Oakland sports history: Oracle Arena, repurposed as a concert and cultural events center; and the original Coliseum baseball diamond, preserved to inspire the next generation of ballplayers. https://t.co/vLuiX01aT0 pic.twitter.com/QuYThO6nhG

"We are also committed to delivering a baseball experience for our fans like no other. Our proposed two-project approach will enable us to deliver on our promises to both our fans and community.” - @DaveKaval. For more information, visit https://t.co/vLuiX01aT0#RootedInOakland pic.twitter.com/HSqZX7DlH8

It will be pretty awesome if everything goes as planned because not only will Athletics fans finally get to say goodbye to the stadium that has been dubbed the worst ballpark in Major League Baseball by many and move into a state-of-the-art ballpark, but residents will also benefit off the move with the plans in place for the Oakland Coliseum site.