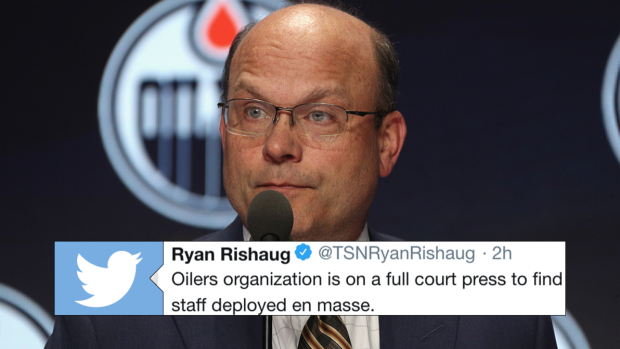 The Edmonton Oilers are still in the playoff picture, but with each loss, they come closer to a top-ten pick as opposed to a playoff spot. The Oilers are 3-7 in their last 10 games and outside of the team's top line that features Connor McDavid and Leon Draisaitl, they haven't been getting much from their forwards.

Sitting just two points back of the final wild card spot in the West, the Oilers aren't out of it by any stretch, but something needs to change before the losing continues and as per Ryan Rishaug, the team could make a move in the near future.

Oilers organization is on a full court press to find help at forward. Scouts and staff deployed en masse.

Cap situation could make it tough, but first round pick, a goaltender, maybe a young developing forward likely all in play.

Normally, this would be good news if you're an Oilers fan, but fans of the team don't seem to be thrilled about the report based on Peter Chiarelli's past trades.

How about adam Larson for Taylor hall? 👀

This will be fun to watch pic.twitter.com/BktJgvMVwE

Not sure that's the word I'd use myself. pic.twitter.com/wzAu8isFze

In other words, it will be interesting to see what moves are made, if any, as the Oilers continue to fight for a playoff spot.