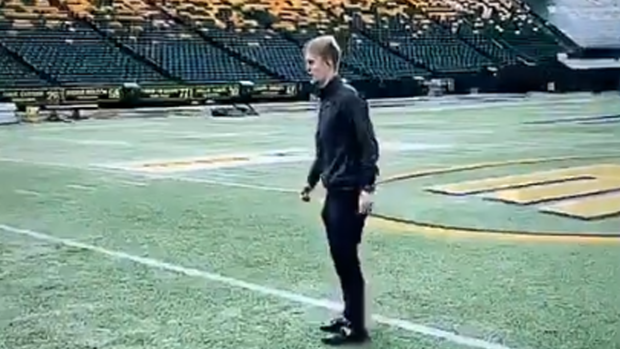 Dmitri Samorukov is officially into the offseason after an extended playoff run (including an OHL championship) landed his Guelph Storm in the Memorial Cup. While they fell just short of a berth in the Final, it was still a great season for the Storm.

Samorukov enjoyed a pretty good year too. Leading the Storm’s defence, Samorukov racked up 10 goals and 45 points in 59 games played. It’s certainly a sight for sore eyes for those in Edmonton, as the Oilers fell short of the playoffs once again.

Kicking field goals isn’t exactly a transferable skill, but it shows the strength their prospect has. Samorukov knocked through a 40-yard field goal with a line drive kick that exploded off his boot.

You may be wondering what his following’s response was to the Instagram poll question. Including our vote (which was “SURE”), it was 85% for the thumbs up.

While it may please Oilers fans in some small way to see this kind of strength, they better hope it doesn’t go so far that he actually starts pursuing…