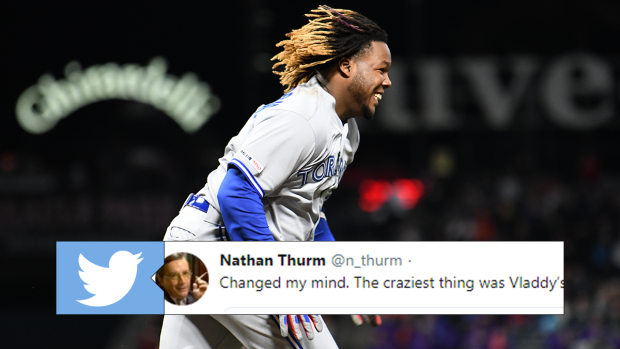 Until Tuesday night, some fans had expected more from Vladimir Guerrero Jr. upon his arrival in the Big Leagues, but everything is pointing in the right direction for the Blue Jays’ top prospect.

Despite a low batting average, Vladdy Jr. has been walking a lot, having good at bats, playing good defence and perhaps most importantly, hitting the ball hard. Not many people can hit the ball like Vladdy Jr. can, which is why he was such a highly touted talent coming out of the minor leagues. And while both his home runs on Tuesday night were evidence of that, a foul ball seems to have really caught people’s eye.

That’s because in the at bat that he walked in (He finished 3-for-4 with two home runs and a walk), he hit one foul ball 120.2 miles per hour. Only one hit has been recorded as harded than that on statcast this season and that was a 120.6 miles per hour single from Giancarlo Stanton.

Vladdy Jr. also has the second hardest hit this season with a 118.9 mph single. So, yes, he is hitting the ball hard.

At 120 MPH, Vlad’s foul ball is the second-hardest hit ball this season. Only Stanton’s 120.6 MPH single is harder.

Oh, and Vlad has also hit the third-hardest hit ball this season too. https://t.co/nPmQ399a7h

Vladdy over here hitting 120 mph foul balls. This is going to be fun! 😂 #BlueJays

That is already the second time in his short career that he has been compared to Giancarlo Stanton and the other time was about how scared pitchers were when he first showed up. Those are some nice comparisons in his first month in the big leagues.

No, Vladimir Guerrero Jr. didn't exactly tear it up in his first series. But one thing that's clear is that his reputation precedes him.