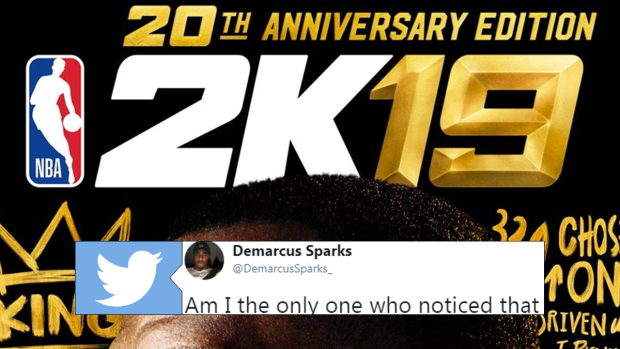 LeBron James is the most well-known athlete in North America and NBA 2K announced that he will be on their cover for the second time in the game’s history.

He will be the fifth athlete to appear on the cover twice (Iverson, Shaq, MJ and Durant have all done it before him), but that’s not what has caught fans’ attention. The main thing that they’re focusing on is the fact that LeBron James is not wearing any particular jersey in this version of the cover.

This doesn’t necessarily have anything to do with LeBron’s decision – it’s entirely possible that 2K is just looking to avoid being involved with the curse again.

In their last four covers, the players have joined a different team after the company released their initial cover. With how this NBA Finals is going, people are starting to believe that this may be LeBron’s last season in Cleveland and this has only added fuel to the fire.

They are showing LeBron on the 2k19 cover without jersey because they know he is leaving Cleveland.

V smart of 2k to put Lebron on the cover w/o a Cavs jersey on. https://t.co/xi8swdhJW3

If you’re going to read this much into their cover art, you should also know that the cardboard cutouts of LeBron promoting the game are of him in a Cavs jersey. Who knows if LeBron will return, but no matter what team he’s on, he’ll be the face of the 2K franchise for the next year.