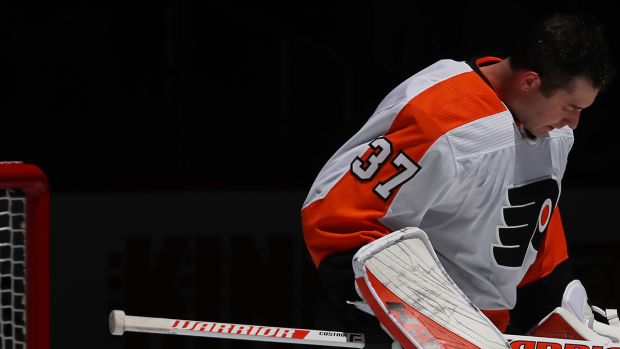 So far this NHL season, there have been a lot of goals scored. Some people might think that’s because of the Leafs new powerplay, but a more likely explanation might be the changes made to goalie pads this season.

As James Mirtle of the Athletic pointed out, the NHL is on pace to have one its highest scoring seasons in 25 years.

Super early but NHL hasn't been this high scoring since 1993-94. Up to about 6.4 goals per game after tonight (and counting).

Obviously, goalies wouldn’t be too excited by that, but would likely get used to it if it’s an even playing field for everyone. What they really wouldn’t be fans of, and Brian Elliott isn’t a fan of, are the new goalie pad regulations putting them in harms way.

“I’ve already sent a couple emails to (NHL vice-president of hockey operations) Kay Whitmore. I’m getting bruised like crazy on my arms...

I think that’s the biggest issue, they take away padding in the arms. It seems like every shot that you take that’s not clean on your blocker or in your glove, it’s leaving a mark.”

That seems like a pretty big issue, but apparently Whitmore has stated that there may be some adjustments coming because “There's no expectation that a goalie should have to do his job getting bruised daily.”

Either way, the high-scoring games have been fun to watch so far, so hopefully they’re able to find a happy medium that keeps the game exciting while keeping goalies safe.

Interesting comment by Dallas Stars GM Jim Nill on @LeafsLunch1050 about the early days scoring burst in the NHL, suggesting that the streamlined goalie chest/arm protectors may be a factor.