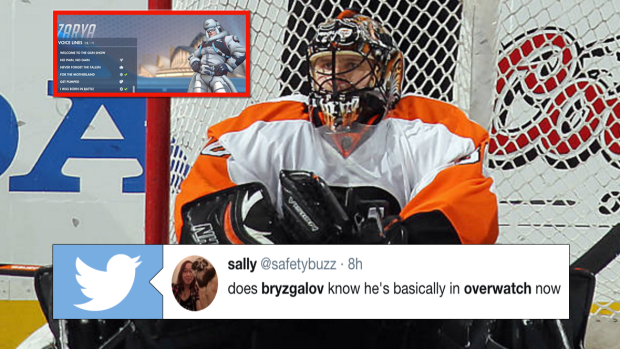 While sports video games are a ton of fun to play, a lot of athletes enjoy playing other games like 'Call Of Duty' for example.

Mitch Marner has been putting time in to help Auston Matthews get less terrible at Call Of Duty. (Via @kristen_shilton)

In fact, athletes like Conor McGregor and Michael Phelps have even starred in the trailer for the game and in the actual game.

Speaking of athletes starring in games that have nothing to do with sports, Overwatch's Summer Games 2017 Event has begun and there are new skins, intros, voice lines, and more for gamers to enjoy.

One voice line in particular, though, caught the attention of the hockey world and it's one that the majority of hockey fans know and love.

Overwatch has an Ilya Bryzgalov voice line and it's perfect #PS4sharehttps://t.co/J8IvLKJjzx pic.twitter.com/YBAgqUcaWn

Zarya got a "It's only a game, why you heff to be mad?" voice line.

I just saw that Zarya has the Ilya Bryzgalov "Why you heff to be mad?" voice line now. Like I said, LIVING for this event. #Overwatch

They did it, the absolute madmen.

Whoever decided to put the line in the game clearly knows their stuff as Zarya, the character that uses the line, is Russian like Bryz.

Although the voice line has to be unlocked with credits, we imagine hockey fans will do whatever they can to get it.

Hopefully the voice line stays in the game when the Summer Games 2017 event is over on August 29th.

Hit the pitch and go for the gold...or just relax and have some fun! 🌴⚽🏅 pic.twitter.com/fIr2iDDi11