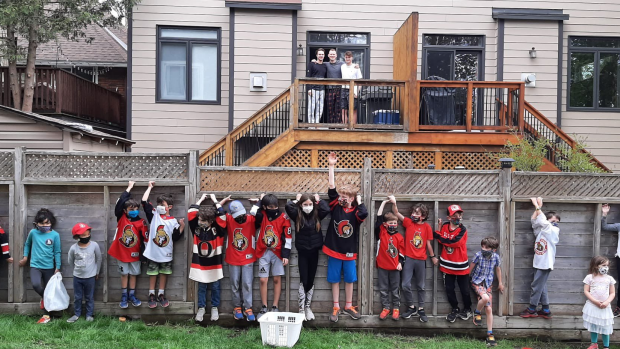 Tim Stützle has become a fan favourite in Ottawa based on his likeable personality, his developing talent, and his relationship with teammates. On Saturday, Stützle thrilled fans once again with his first career hat-trick against the Winnipeg Jets.

The only problem, there were no fans in the arena to celebrate it properly with him.

With COVID-19 restrictions continuing to prohibit fans from seeing Canadian teams live, the ice was pretty clean after Stützle potted his third goal into a yawning Jets’ cage.

For the fan base endearingly referred as the “Sickos,” that wasn’t good enough!

In a video posted by Twitter account PositiveSensFan, local Ottawa kids could be seen tossing a ridiculous number of hats over Stützle’s back fence in celebration of the special milestone. Stützle watches the hats come flying over the fence from his back door, smiling and waving at the dedicated Sens fans.

After a while, roomates and fellow Sens players Brady Tkachuk and Josh Norris also stepped out to greet the fans.

Overall, it was a pretty special moment for Stützle and the fans. There may not be too many positives to fans being unable to watch games live, but the fact that it created a situation in which this could happen is definitely one of them.

So is Stützle going to clean up all those hats himself, or are Brady and Josh going to join in?