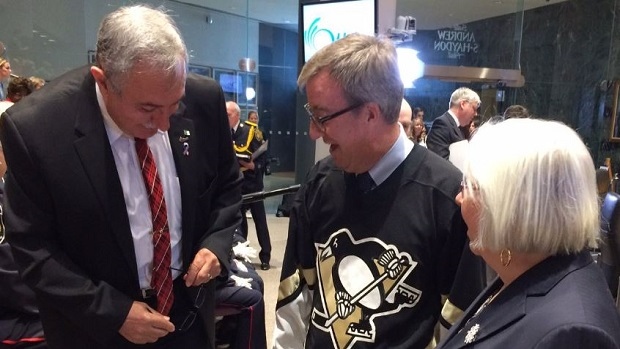 Ottawa mayor Jim Watson was quite the busy man during this year’s NHL playoffs.

During every round of the playoffs, Watson made some friendly bets with someone from the other side. For the opening round series against the Boston Bruins, he made a bet with the Chargé d'Affaires at the US Embassy.

My playoff bet with the Chargé d'Affaires at the US Embassy - Beaver Tails vs Boston Cream Pie. Building momentum for bigger bets #ALLIN

Watson originally wanted to make the bet with Boston mayor Marty Walsh, but Walsh decided not to partake in the friendly wager because the past few bets have not worked out in his favour.

After starting small in the opening round, Watson went a little bigger for the second round series against the New York Rangers.

You're on! If the @Senators win we'll send you some New York Bagels, I'll wear a Senators' jersey and plant a maple tree in NYC. #LGR https://t.co/3jvp8irrdM

For the third round, Watson and Pittsburgh mayor Bill Peduto agreed to rock the winner’s jersey and also donate $10 per series goal to charity.

#Mayorsbet If @Senators win series, @billpeduto to wear #SENS jersey. We'll both donate $10 per series goal to charity. Fans can donate too!

#Mayorsbet: if @penguins win series, I will wear Penguins jersey. We'll both donate $10 per series goal to charity. Fans can donate too!

Since the Sens ended up falling short against the Penguins, Watson followed through on his word on Wednesday as he rocked a Penguins jersey and made a $160 donation to the Ottawa Food Bank.

#MayorsBet with @billpeduto:
$160 donation to #OttFoodBank
Still in denial about OT goal that eliminated #Sens from POs -Donating extra $10 pic.twitter.com/XLZkM2XmCU

Nothing wrong with a little friendly competition, especially when it ends up benefitting so many people in the end.