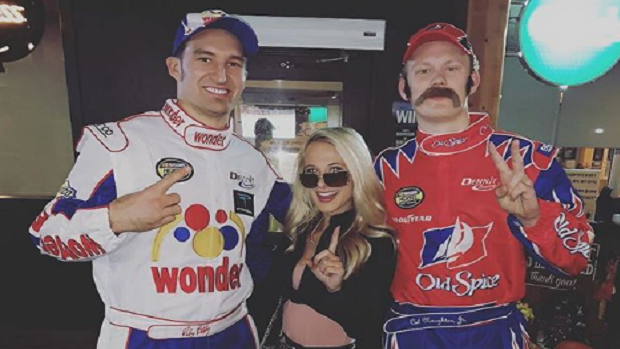 Ricky Bobby said, “If you ain’t first, you’re last”, and the Ottawa Senators’ Brady Tkachuk and Mark Stone were definitely first to the game this year with these awesome Halloween costumes.

While Tkachuk is a rookie to the league and to the NHL Halloween costume game, Stone is a grizzled vet in the subject, and was the most muscular Peter Pan in the character’s history last year.

All the world is made of faith, trust and pixie dust

Though Tkachuk bears a downright striking resemblance to Cal Naughton Jr., he won’t be doing any shaking or baking anytime soon, as the American rookie will be sidelined for a month after tearing a ligament in his leg in a game versus the Dallas Stars on Monday night. The injury occurred after Tkachuk delivered a hit in the first period, but he still rallied to play over 14 minutes, and scored a goal in the third period.

In the movie, Cal ends up stealing Ricky’s girl. We don’t think Mark Stone has anything to worry about, though,considering the way Tkachuk visibly cringed when fellow rookie Max Lajoie mentioned his girlfriend, but the trio makes a very Talladega Nights cast either way.