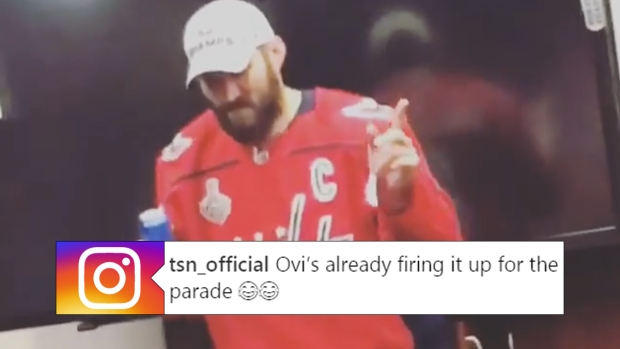 Alexander Ovechkin and the Capitals went on an absolute bender after the team’s Stanley Cup victory and after a short break to make a Late Night appearance in New York, Ovi is back in party mode.

The Capitals’ Stanley Cup parade is being held today, with the start coming at 11am ET and by 9:30am, a bunch of the Capitals were already firing things up again. We’ve seen some photos of Devante Smith Pelly with a championship belt a couple of tall boys, but once again, Ovi is stealing the show with his drinking and dancing.

Ovi’s already firing it up for the parade 😂😂 . (Via: @smithpelly)

If this is Ovi at 9:30am, we could see this parade going in a similar direction to what happened at and after the Nationals game on Saturday. It’s going to be a fun day for Captials fans, so we’ll make sure to keep you updated all day long.

If someone is doing a breaststroke in a public fountain, we’re going to let you know about it.