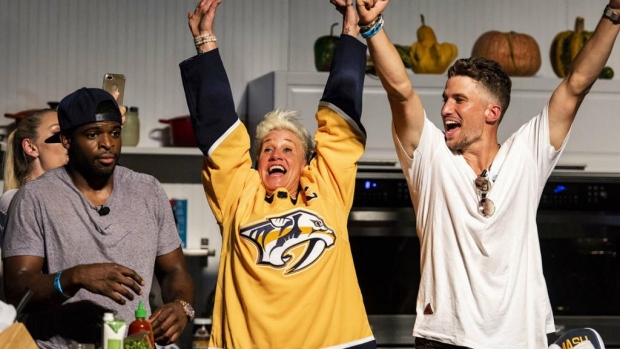 P.K. Subban and Roman Josi can certainly defend the blue line, but can they defend themselves in the kitchen with a bunch of on-lookers judging their every move?

Although they're not d-partners, the Predators’ teammates teamed up along with chef Anne Burrell to take on Logan Ryan and Kevin Byard of the Tennessee Titans guided by chef Tim Love for a celebrity cook-off at the Music City Food and Wine Festival on Friday night in Nashville.

Cooking up a variety of different dishes, Subban and Josi defeated the two Titans defenders with a pappardelle crab dish, a seared piece of beef, a country ham hash and fried egg to go along with side dishes like sweet potato, grape garlic and ginger mash.

Josi even offered up a friendly little chirp to Subban, boasting over his cooking skills compared to P.K.’s.

@lindseyvonn and i getting in @rjosi90 kitchen. Literally!! gotta give him 1st star for his work in those corners! 🤣🍽 @predsnhl

Each team had 40 minutes to put together their meals before they were to be analyzed by a group of judges with each dish needing sweet potato and ham as a requirement.

Titans quarterback Marcus Mariota was supposed to attend as one of the representatives, but an elbow injury that could sideline in the Titans’ Sunday matchup against the Texans forced him to skip the event.

This was the second year in a row Josi attended the event. Subban was joined alongside girlfriend Lindsay Vonn. The cook-off was emceed by Jessie James Decker, wife by Titans receiver Eric Decker.