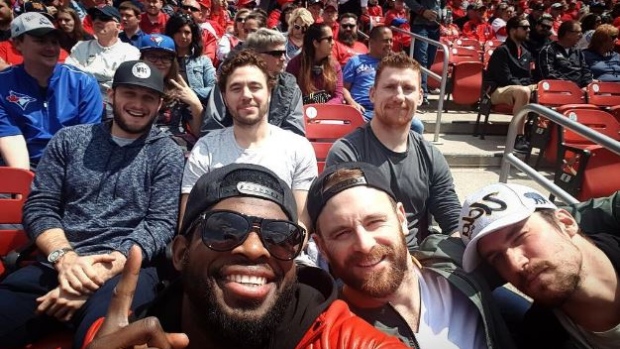 The Nashville Predators kept their hot start in the postseason going on Wednesday night as they opened up their second round series with the St. Louis Blues with a 4-3 victory on the road.

The #Predators open up the second round with a 4-3 victory over the #Blues.

The Blue Jays just so happen to be in St. Louis at the moment for a four-game series with the Cardinals, and they got to take in Game 1 with their game getting postponed due to inclement weather.

Great having my @bluejays @joeybats19 @russellmartin55 and the rest of the crew come support the boys today! #letsrise @predsnhl #pkapproved

P.K. Subban probably wasn’t expecting to see so many friends from back home after his big game, but it was a nice surprise for him and his teammates.

On Thursday afternoon, Subban, Roman Josi and some other members of the Preds returned the favour by taking in the Blue Jays' first of two games against the Cards.

There’s no better way to relax after a big playoff victory than by enjoying some afternoon baseball in the sun.

The Preds have had one of the most enjoyable weeks in sports. They haven’t lost a playoff game yet this year, and they got treated to some front row seats at UFC Fight Night this past weekend.