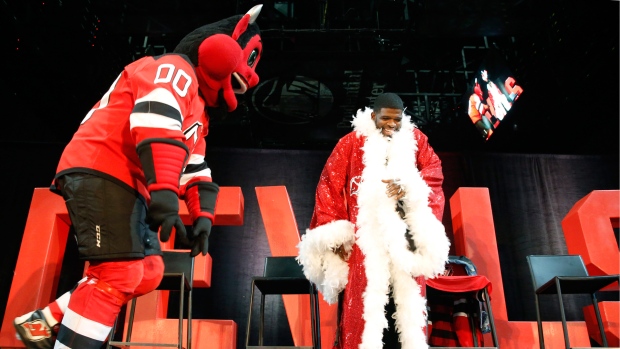 If there's anyone who knows how to endear himself to a new fan base, it's New Jersey Devils defenceman P.K. Subban.

After the Preds acquired him from the Habs, P.K. was spotted in a local bar singing karaoke and socializing with the local fans.

Although it's been over a month since the Devils acquired P.K. from Nashville, the team finally held their introductory press conference on Thursday at the Prudential Center in front of thousands of Devils fans.

The New Jersey Devil, who has since recovered from smashing into a pane of glass, was on hand to give P.K. a special "Subbanator" Ric Flair robe.

#PKSubban was Stylin’ and Profilin’ at his introductory press conference 😂 . (🎥: @amandacstein)

As the conference got underway, Subban reflected on his time with the Predators, but couldn't help but poke a little fun at his old club when asked to look up at the Devils' three Stanley Cup banners. How about those banners in Montreal, though, P.K.?

Was @subbanator throwing shade here at the #Preds? 🧐😂

Remember when the Predators released the three banners from their "historic" 2017-18 season? To be fair to P.K., the reporter did somewhat set him up with a loaded question by the way he phrased it.

The Predators were relentlessly mocked for raising a regrettable banner in their home opener: https://t.co/XBJGIysyhy pic.twitter.com/lnMk5xe0fp

Talk about warming yourself up to your new fanbase.

Subban and the Devils head to Nashville for a game on Saturday, December 7th in what'll be P.K.'s return.

Heading into the sixth year of an 8-year, $72,000,000, the 30-year-old Toronto native is coming off a career-low of 31 points (9 goals, 22 assists) in 63 games, and will be counted on to bring the Devils back to the playoffs along with Jack Hughes and a healthy Taylor Hall.