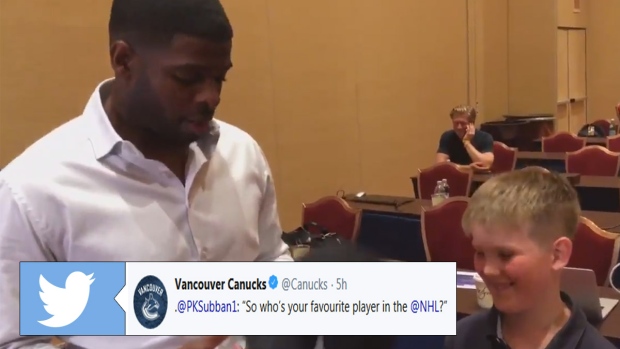 P.K. Subban is one of the most popular players in the NHL and it’s not just because of the way he handles himself on the ice. The 29-year-old happens to be one of the most active players in the league when it comes to working in the community and always manages to put the fans first, regardless of who they cheer for.

The Nashville Predators defenceman is in Las Vegas for the NHL Awards as he’s up for two different awards this year. By no surprise, one of them happens to be the King Clancy Memorial Trophy, which is the award given out to the player who has made a significant contribution to his community. During Tuesday’s NHL Awards media session, a young fan asked Subban for his autograph. However, this wasn’t any ordinary fan.

.@PKSubban1: “So who’s your favourite player in the @NHL?”

Henrik Sedin’s son, Harry, approached Subban to ask him for his autograph and the Norris Trophy nominee did not hesitate to fulfill the youngster’s request. However, while doing so he asked Harry who is favourite player is and by no surprise he said his father. When asked who his second favourite player is he quickly responded with ‘Daniel’.

Neither answer was the one Subban was hoping to hear, but he didn’t take it too personally and still posed for the photo with the young man.

Subban was also one of the many NHL stars who showed up to surprise the members of the Humboldt Broncos who were in attendance and he showed just why he’s up for the King Clancy Memorial Trophy with one simple post.

P.K. #Subban and Anze #Kopitar were two of the many #NHL stars to surprise the Humboldt #Broncos on Tuesday. • More at BarDown.com • #Repost @subbanator Special group!! Honoured to have met you all!! #humboldtbroncos