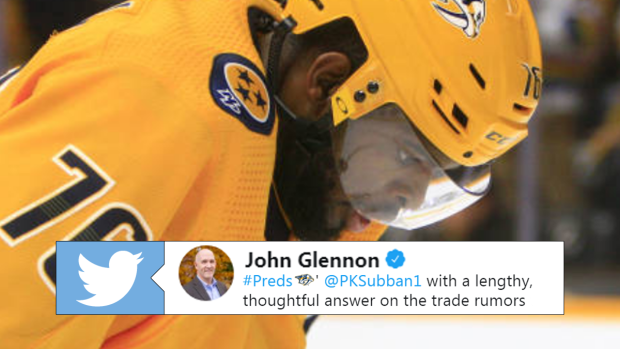 The Nashville Predators suffered another disappointing ousting this postseason. In fact, it is probably the most disappointing to date. They couldn’t get out of the 1st round after coming into the dance with possible Cup Final expectations.

As comes with every disappointment, the Preds and their fans are having to face some tough talks. That includes the possible departure of star defender P.K. Subban.

The Preds are paying Subban $9mil/year, and with a possible major change needed in Nashville, it looks like Subban may be on the block. With the season officially over in Smashville, Subban responded to the comments with a very heartfelt description of what it’s like to play in the city.

#Preds' @PKSubban1 with a lengthy, thoughtful answer on the trade rumors that always seem to swirl around him: pic.twitter.com/7vkx3HJsii

Some people don’t like Subban, citing his personality as too much for the NHL, but overall he is an extremely likeable guy. He always has time for fans, he gives back to the community in a number of ways, and he’s also just a funny guy.

Reading this I see PK eventually having a successful career in broadcasting, and his politically correct responses tells me he'd get elected in office in any level of government.

We are lucky to have PK.