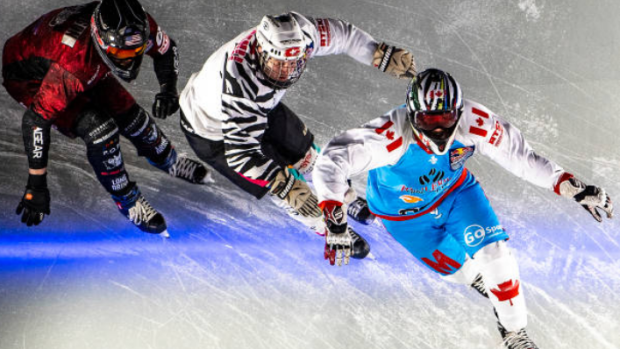 Canadians Myriam Trépanier and Scott Croxall each took home a medal in the Red Bull Crash Ice Event at Fenway Park in Boston over the weekend.

If you're unfamiliar with Crashed Ice, it's a skating competition that features racers wearing hockey equipment pacing through a downhill track with speeds reaching upwards of 80km/h.

The sight in itself is pretty amazing to watch, as the field at Fenway was transformed into the 350-metre race circuit.

You don't want to miss this. #RedBullCrashedIce

Even David Ortiz was impressed.

Trepanier walked away with a silver medal, while Croxall finished with a bronze. Croxall's brother, Kyle, came into the men's race leading the overall standings, but was eliminated in the round of 32 with a fourth place finish in his particular race. Fellow Canuck Jacqueline Légère led the women's overall standings was eliminated in the semifinals and finished fifth.

You can watch the full stream below.

A group of beer league hockey players tried their hands at the course in what makes for some pretty great footage shot from a Go-Pro.

Would you give this a shot?