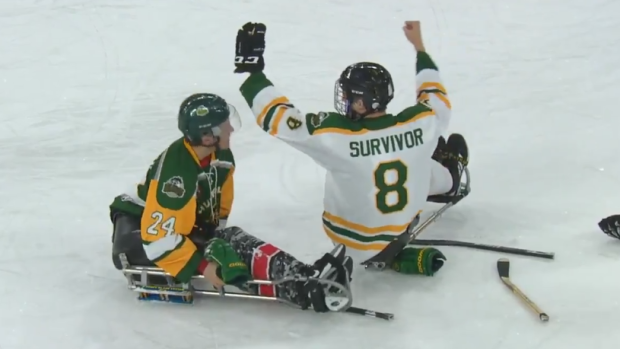 Over seven months have passed since Humboldt Broncos Ryan Straschnitzki and Jacob Wassermann survived the tragic bus crash that claimed the lived of 16 people affiliated with the Junior A hockey club.

Straschnitzki, 19, and Wassermann, 18, were one of 13 survivors in the April 6th crash, and while they'll never be able to play the conventional form of hockey agin, the two survivors were able to step back onto the ice together as competed in a sledge hockey charity game at the University of Denver on Friday night.

#HumboldtBroncos survivors #RyanStraschnitzki & #JacobWassermann reunited for a charity game of sledge hockey on Friday night and dropped the mitts. 👏😂 ••• (🎥Via: Twitter/DU_Hockey)

Placed on opposite teams during an intermission scrimmage during between the Pioneers and Providence Friars game , Straschnitzki wore a green Humboldt jersey, while Wassermann donned a white one with each playing sporting the word 'survivor' on the nameplate.

"These are really nice," Wassermann told The Canadian Press regarding the jerseys.

"These were for a survivor game Dawg Nation had this summer and they had a few left over for me and Straz to wear and I think they look amazing."

"It’s pretty awesome, Straschnitzki said commented on playing in the game.  It’s very cool and it’s definitely very meaningful and goes to a lot of the guys who are on the ice today."

The two former Broncos weren't the most seasoned players on the ice, so they decided to drop the mitts to get the crowd going.

"Oh, it was fun. Me and Straz had a good little wrestle," Wassermann explained. "It was all in good fun though and definitely pre-planned if you guys couldn’t tell."

Earlier on in the night, the two teamed up on the same squad wearing Charlestown Chiefs jerseys for the first time together since playing their last game with the Broncos last April. They even managed to score a goal together, as Straschnitzki, a former defenceman, set up Wassermann, who's not exactly used to scoring since he was a goaltender with the Broncos.

Ryan Straschnitzki and Jacob Wassermann prepare for practice in Denver prior to an exhibition game tonight. Truly Inspirational ❤#HumboldtStrong pic.twitter.com/bd0N2gdu2D

Giving these two awesome jerseys signed by @Hanson_Brothers away tomorrow to two young men that inspire us all to never give up on your dreams!! #HumboldtStrong pic.twitter.com/7ix1KbRaWy

"I set him up for a nice one. I think it was pretty cool. We got to see each other on the ice and it was fun," he said.

The two players were invited to Denver by The Dawg Nation Hockey Foundation, which aims at helping adult hockey players and their families overcome catastrophic injuries or illnesses.

The two will be in attendance for the Colorado Avalanche game on Saturday where they'll drop the puck at the ceremonial faceoff before taking in a Denver Broncos game on Sunday.