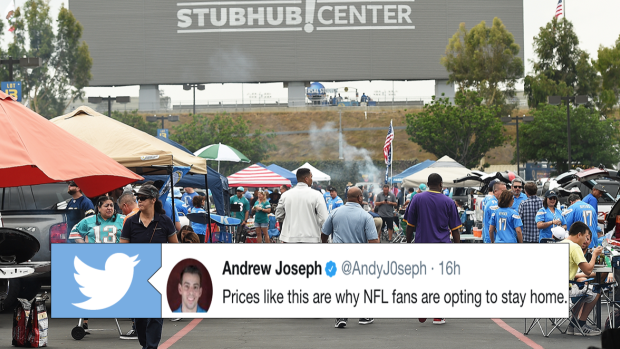 Sunday, the Chargers played their first game in Los Angeles as they took on Jay Cutler and the Miami Dolphins.

The Chargers got a solid amount of fans in the stadium for their first home game in L.A. as the StubHub Center nearly sold out.

If there was something fans could complain about, though, it was the parking prices for the game that cost them a ridiculous amount of money.

General Parking at the LA Chargers game is 100 dollars

As Arash Markazi pointed out, the $100 price tag was for tailgate parking, but based on some of the tweets from fans and people at the game, general parking also cost $100.

Tailgate parking for today's #Chargers game was $100. You could get general parking (no tailgating) passes on StubHub for $40.

$40 parking isn't something to laugh about either, but it's safe to say fans were more upset about the $100 parking at the game.

Lol. You can have @Chargers back. We don't want them in LA. Not with $100 for parking. #RaiderNation. https://t.co/fTAgkuJTY6

Nothing about the entire @Chargers franchise is worth $100, much less the parking https://t.co/Z1YhShHUoZ

Imagine paying 100 in parking to watch the chargers and the Dolphins https://t.co/3A6aalovq2

"Parking at a Chargers home game costs $100 this year." pic.twitter.com/9lc8JkIomP

Damn, @schadjoe reporting that general parking for the @Chargers game is $100. Welcome back to the @NFL Los Angeles

For fans hoping the prices will go down, don't get your hopes up.  Apparently in the pre-season, parking cost the same amount:

How about this? General parking at Stub Hub Stadium is $100.00 😳😳😳#crazy #Saints vs #Chargers @WWLAMFM