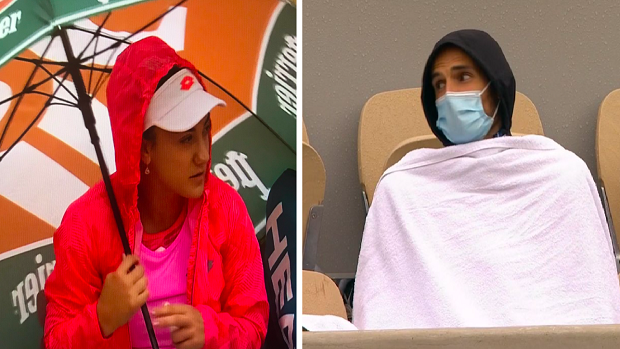 The French Open is currently underway in Paris, where the Grand Slam tournament is being played at the Stade Roland Garros on outdoor clay courts.

It sounds like the regular song and dance for the storied event, but it isn’t .

Just like everything else in the world, the tournament was affected by the COVID-19 pandemic. Of course, it’s being played without fans in attendance, but the most significant change for the French Open is the dates on which its being held.

The tournament is usually played in late May and early June, when the weather in France averages between a balmy 18°C and 21°C. Now, with the tournament being pushed back into the fall, when the conditions average  a much colder 7°C -11°C, things are a little chilly.

Of course, this had made for a totally different environment for the athletes, who are playing through conditions they’ve never experienced before, and Nadal called the conditions very extreme.

Twelve-time champion Rafael Nadal says this year's #FrenchOpen could be the "toughest" he has taken part in.

The views of athletes and everyone in attendance trying to keep warm speak for themselves, and Azarenka and  Kovinic were so fed up with playing in the cold that they left the court for a while.

Gasparyan-Mertens has also been suspended on Court Simonne-Mathieu after Mertens was slipping. Image of the tournament so far: pic.twitter.com/I47dZymIrZ

Victoria Azarenka was definitely not impressed with the conditions.

“You guys are joking right? What are we doing here? This is getting a little bit ridiculous. I’m not sitting here because I’m going to get frozen. It’s 8 degrees. I live in Florida, I’m used to hot weather.”

- Victoria Azarenka, who is not impressed. #RolandGarros

Azarenka instantly not happy with the conditions on walking out. #RG20 pic.twitter.com/K0FMqOafPW

She’s definitely in better spirits now, and posted this hilarious and accurate comparison to Twitter.

Can you guys spot any differences? 😂 😂 😂 pic.twitter.com/Kr4586vuKf

Honestly, it’s not far off.