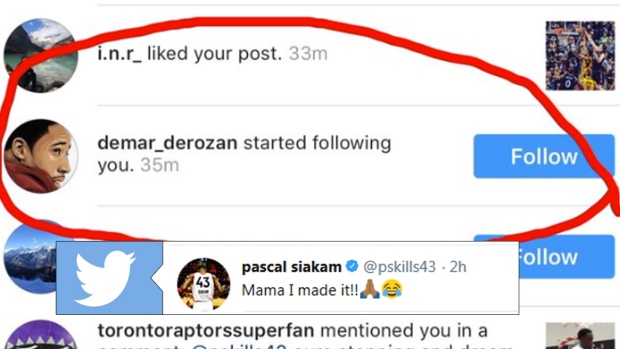 The Toronto Raptors selected Pascal Siakam with the 27th pick in the first round of the 2016 NBA Draft and he managed to work his way into the starting lineup in his rookie season.

Last year, Siakam started 38 of the 55 games he appeared in for the Raptors and also played a key role in helping the Raptors 905 clinch their first NBA D-League championship. Despite having a pretty eventful rookie campaign, the 23-year-old decided he finally made it big after a recent follow on his Instagram account.

As great as Siakam’s tweet is, it’s even better that he wasn’t even following DeRozan to begin with and his followers were able to point it out pretty quickly.

you’re not even following him bro

Question is: why aren't you following him?

After averaging 4.2 points, 3.4 rebounds and 0.3 assists per game in his rookie season, Siakam is currently averaging 7.5 points, 4.5 rebounds, 1.8 assists and .9 steals per game in 20 contests this year.