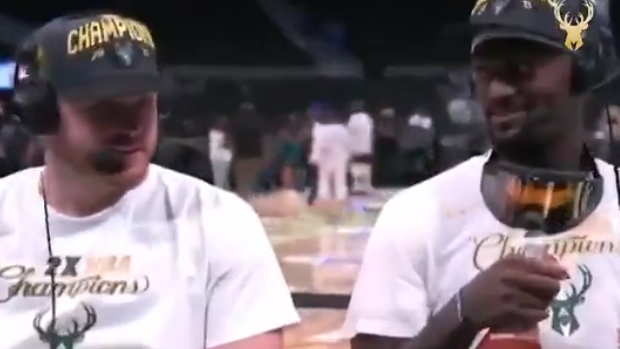 NBA players spend about most of the year trying their best to stay in shape and take care of their bodies, but for a brief window it’s okay to let loose, take a vacation, or relax a little bit.

Unless, of course, you just won the Championship. Then it’s full-time party mode.

That would be the mode that Pat Connaughton, Bobby Portis, and the Milwaukee Bucks find themselves in after Tuesday’s thrilling Game 6 victory secured the 2021 NBA title. Following the game, the pair of Connaughton and Portis were speaking on broadcast when they were asked an evidently damning question…

How much champagne had they consumed?

"How much champagne have each of you consumed?"

That’s the look that essentially says “how honest should we be?”

The clip went viral after the Bucks shared it, and it’s particularly popular based on Bobby Portis quickly ascending on the Milwaukee fan favourites list. Portis was probably the second best Bucks players during Game 6, and he’s been through the struggle as well.

"I wouldn't trade it for the world!"

Bobby Portis on his journey over the past year, culminating in winning his first NBA Championship with the @Bucks. pic.twitter.com/nu62bXsaBy

I WOKE UP A CHAMP! WHAT THEY GONNA SAY NOW! FROM AN UNDERDOG TO A TOP DOG! TURNED NOTHING INTO SOMETHING! STAY LOCKED IN!