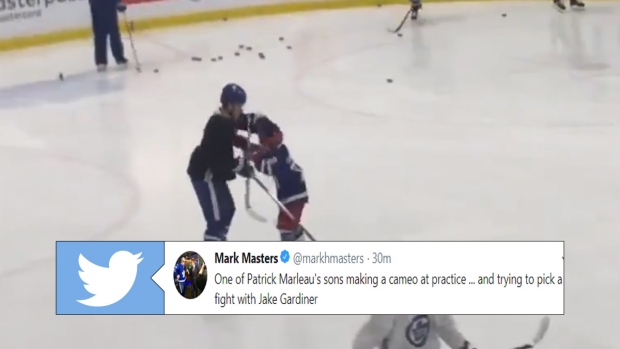 Patrick Marleau has fit in quite nicely with the Toronto Maple Leafs in his first season with the team. Through 75 games, the 38-year-old has 23 goals to go along with 18 assists for 41 points and he’s gotten along nicely with just about everyone on the roster.

Not only does Marleau feel right at home with his new team, but so do his children. On Sunday afternoon, the Maple Leafs hit the ice for practice and one of Marleau’s sons ended up making a cameo appearance early on.

One of Patrick #Marleau’s sons joined the #MapleLeafs at practice and really wanted to drop the gloves with @jgardiner272 😂 • • (🎥: Twitter/markhmasters)

We’re not sure what Jake Gardiner did to Marleau’s son, but he sure was determined to drop the gloves with the 27-year-old defenceman considering he followed him around the ice and gave him some little whacks along the way.

One of Patrick Marleau's sons making a cameo at practice ... and trying to pick a fight with Jake Gardiner pic.twitter.com/2cod6RI2RO

It’s Brody Marleau’s 9th birthday today, hence the special skate with the #Leafs. Mitch Marner told us Brody’s trying to steal his girlfriend, a charge Brody gave an emphatic “Yeah!” to during our post-practice media scrum with him.

This isn’t the first time one of Marleau boys has joined the team on the ice during a practice and it most likely won’t be the last time, even if he tried to take out Gardiner during his brief appearance.

Little Landon (in green, obviously) has a good shot on him. Nazem Kadri joked it might even be harder than his. pic.twitter.com/DUl9peHFZ5