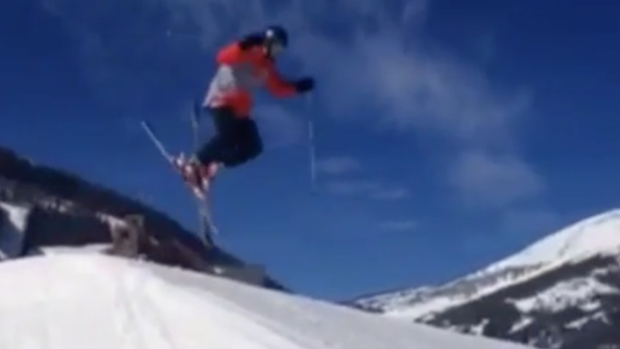 Coming off of his record fifth Super Bowl victory, Brady has been extremely active on social media in a variety of hilarious ways, from poking fun at himself multiple times for things he did during the playoffs to making a suspect board for his stolen jersey.

Hey @edelman11 "Ya suspect, yeah you! I don't know what your reputation is in this town, but after that s@?# you pulled, you can bet l'll be looking into you!"

Apparently Brady also likes to indulge in other sports as well when he's not playing football as evidenced by a video he posted Thursday of himself skiing.

Normally, that wouldn't be a problem as most athletes have hobbies outside of their sport, but the video Brady posted was of him absolutely eating it on the slopes.

If you french fry when you're supposed to pizza, you're gonna have a bad time! Trust me!!!

As you can imagine, Patriots fans were freaking out after seeing their quarterback take a painful looking wipeout.

Tom Brady's instagram of him skiing is actually hilarious, but I might have a heart attack. get back in the lodge & off the slopes!

Every @Patriots fan watching Tom Brady go all out on his ski holiday. 🐐⛷#PatsNation pic.twitter.com/scWZdvXhzi

Between posting the cliff jump video two years ago and now the ski jump fall, Brady must take great pleasure in freaking out his fans

You know I love Tom Brady's Instagram posts but if he could not ski/crash and almost give me a double heart attack that would be great.

in all seriousness, someone get Tom Brady off the god damn ski slopes ⛷

Tom Brady out a video in IG of him going off a ski jump and falling, does he not know how much he is scaring Patriots fans

Luckily, Brady didn't hurt his throwing shoulder, but it looks like he hurt his left shoulder...

Still, if you're a Pats fan, you have to love the south park reference and the fact that he posted the video in the first place.

Obviously if he was seriously hurt, he probably wouldn't have posted the video.

While many fans may want Tom off the slopes, we imagine he'll get back out there.  Hopefully before he goes back out, though, he takes some lessons from his daughter.