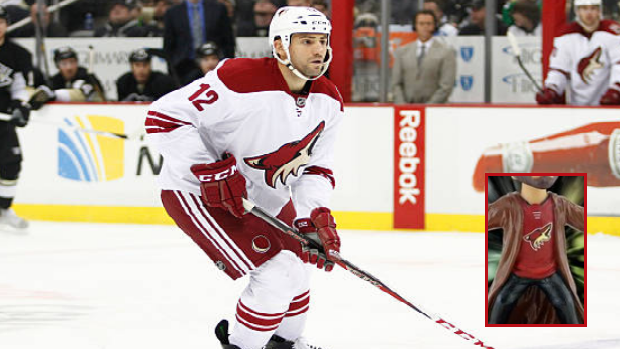 Paul Bissonnette during an away game in 2014. , Justin K. Aller/Getty Images

Former Arizona Coyotes forward Paul Bissonnette is currently serving in the radio booth for the team and remains a huge part of Arizona’s hockey community. Throughout his six year career, the 32-year-old gained a large following due in part to his unique social media posts. Today, he impressively has more than one million followers on Twitter.

Ahead of Saturday’s matchup between the Coyotes and Vegas Golden Knights, the team released a hilarious promotion video for Bissonnette’s bobblehead that will be given to fans for Star Wars night. The staff decided to get creative and give Bissonnette the name ‘Obiz-Wan Kenobi’ for the evening. In a promotion video, Bissonnette hilariously attempts to use the force until his broadcasting partner Bob Heethuis takes matters into his own hands.

First 10,000 fans tonight get a bobblehead, but all of you get to enjoy Bob Heethuis's acting debut in this promo. Give the man a raise @ArizonaCoyotes. #MayTheForceBeWithYou pic.twitter.com/vZrAKHKcTs

It’s surprising how much the bobblehead actually resembles Bissonnette, and it's not the first one he has received either. In 2014, the ECHL's Wheeling Nailers, who he played 101 games for, designed an impressive one for him of their own.

Check out who our own @Nailers_PXP ran into this afternoon! It's Paul Bissonnette, with his very own bobblehead! pic.twitter.com/iT303DsiMC

There have been some other unique bobbleheads given out in the past that also accrurately resembled the athlete/celebrity being honoured. Here’s a look at some other notable ones.

All week #YourCougars have been revealing our bobblehead lineup for this season across social media! The first 1,500 fans will receive this bobblehead on July 27 when we celebrate the anniversary of the iconic movie, Wayne's World. ✌🏼#PartyOnWayne #PartyOnGarth #MiLB #MiLBisFun

Head to the ballpark for Villain Appreciation Night on July 19th featuring a special Shooter McGavin Bobblehead package and an appearance by Shooter himself. Link in the bio.

The Shooter McGavin is definitely a favourite.

According to ESPN, Arizona has the NHL’s fourth lowest attendance numbers at 13,359, so it looks like coming home with an ‘Obiz Wan Kanobi’ souveneir shouldn’t be much of an issue.

May the force be with you, Obiz Wan.