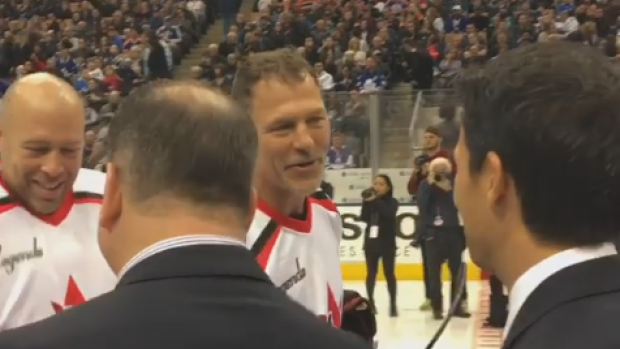 The Hockey Hall of Fame will induct its latest round of Hall of Famers into its prestigious venue on Monday night.

Danielle Goyette and Jeremy Jacobs will be inducted into the builder’s category.

Friends and teammates Selanne and Kariya happy to be immortalized together forever https://t.co/LXwQTLU1W4 #TSNHockey pic.twitter.com/ppvsRu15AL

Hall of Famers Mark Recchi and Dave Andreychuk remember their success and longevity in the game https://t.co/KB6PuN8GRW #TSNHockey pic.twitter.com/FJpdSGI100

The Hall of Fame weekend celebration lasts four days, with a special Hall of Fame game played on the Sunday before Monday’s official induction.

After the game was completed, the two teams exchanged mandatory handshakes. Scott Stevens, who elected back in 2007, participated in the game for Team Kurri.

According to TSN’s That’s Hockey host Gino Reda, this was the first time since Stevens infamously knocked out Kariya in the 2003 Stanley Cup Final that Kariya and Stevens spoke.

It's hard to imagine that 14 years has passed since “the hit” occurred with no contact between the two. Kariya and Stevens seemed pretty upbeat when their eyes and hands locked in as they acknowledged each other.

It’s good to see these two put the past somewhat behind them, even if it was for a brief moment.

You can watch the induction ceremony live on TSN2 on Monday night.