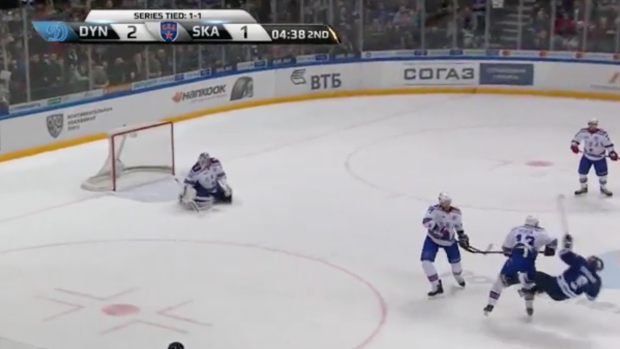 No, the former Detroit Red Wing great who is now playing in the KHL is known for his slick hands and incredible skill.

Pavel Datsyuk pulled off another shootout classic in the KHL All-Star Game 😱😱😱 (Via: @KHL)

Datsyuk finished the season with 34 points in 44 games for SKA Saint Petersburg and helped his team make it to the playoffs.

Sunday, with the series tied 1-1 against HC Dynamo Moscow, Datsyuk did something you rarely ever see from him, destroy an opponent with a hit, and the hit actually led to a game misconduct.

Datsyuk racked up 25 minutes in penalties on the one play, and you can see why he was frustrated as he was hit pretty late before exacting his revenge for lack of a better term.

Obviously the game misconduct comes as a shock, especially considering Datsyuk has never had more than 35 total penalty minutes in one season in his career (NHL and KHL).

In fact, what's even more insane is that aside from the 35 penalty minute season in 2003-04, the 25 minutes in penalties he racked up Sunday is more than he's had in any other season of hockey outside the 03-04 campaign.

Luckily for Datsyuk, his team still won the game without him, 4-2, to take a 2-1 series lead.