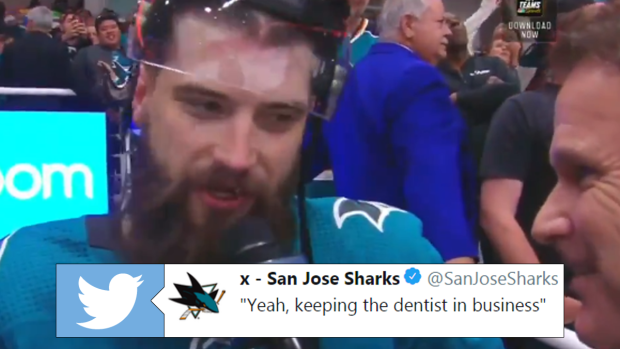 Everyone knows that hockey players are just about as tough as they come. When playoffs finish up for teams, it’s usually followed by a slew of injuries that have accumulated throughout the postseason unbeknownst to the fans watching.

Well, it didn’t take long for Joe Pavelski of the San Jose Sharks to rack up his first injury, and there is no hiding this one…

Now this is a hockey player. Pavelski says he knew something was messed up, but it was nice to hear the fans cheer. #SJSharks pic.twitter.com/1Loqu4NpUG

Pavelski was hit in the face with the puck after Brent Burns’ wrister from the point caught him up high. While getting a disc of frozen rubber to the face is certainly never fun, there was a silver lining to this particular face-sweller.

It caromed off of Pavelski’s face and straight into the Vegas Golden Knights net, giving the Sharks the all-important 1-0 lead. It was a lead they never relinquished, and San Jose would go on to take Game 1 of the series.

Burns wasn’t meaning to hit his teammate in the face, or at least we certainly hope not, but it is an area that he has experience in. Just take one look at Burns’ gap-tooth smile and you’ll know that he’s paid his dues in the dental game. In fact, that’s what he ended up giving a shout-out to dentists after apparently creating some work for them.

Pavelski just counting to see how many he’s got left. #BecauseItsTheCup #StanleyCup pic.twitter.com/MtYq2G7bUU

Hockey is the best.