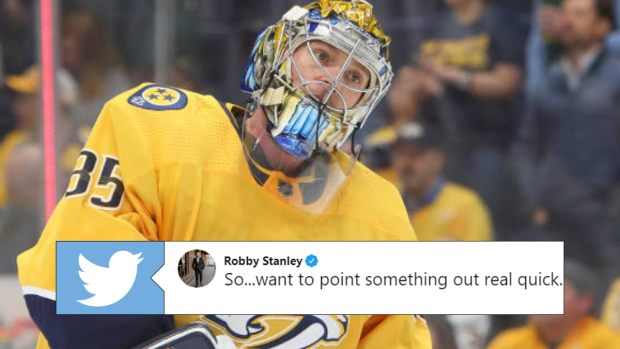 Pekka Rinne has been struggling in the crease as of late, but he’ll likely always be beloved in Nashville anyway. Just two years removed from a Vezina Trophy, Rinne has been a staple in the Predators blue paint for nearly a decade and a half.

In response to the devastating tornadoes that passed through Tennessee, Rinne gave the state another reason to love him even more.

So...want to point something out real quick. I had somebody tell me they saw Pekka Rinne come into a store yesterday and buy every single flashlight they had in the entire store to donate for tornado relief. He's a cool guy.

The most refreshing part of stories like this is that he was simply seen doing it. It’s not like there was a massive press conference, he didn’t post it anywhere on social media himself. He just wanted to do a good deed for the city and state that has treated him so well, and he didn’t need any attention or recognition for it.

Similar to when Matt Dumba helped out a stranded driver recently, Rinne just wanted to do the right thing.

I 100 percent believe that. And he’s 100 percent a Tennessean at this point. Thanks for sharing. I hope you’re well.

Guy needs a statue outside of Bridgestone once he retires

Regardless of the season he's had Robby, I am so glad that fate had me wait until Winter Classic #Preds jerseys for me to finally get one with 35 on it.

We Love Pekka. Proud he has been our goalie all these years. Class Act all the way a good good man.