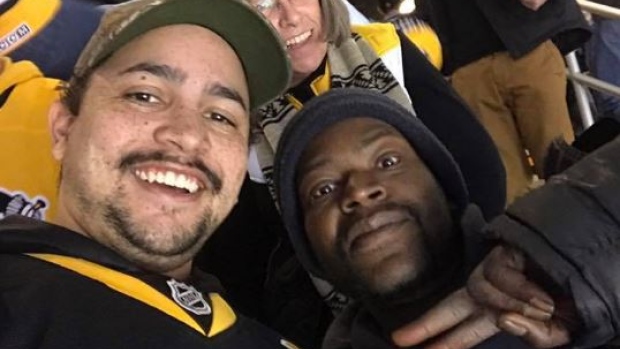 Last week, Penguins fan Jimmy Mains was about to enter the PPG Paints Arena to watch Pittsburgh take on the Tampa Bay Lightning when he was approached by a homeless man asking if he had any money to spare. While Mains didn't have any money on him, he did have an extra ticket to the Penguins game, which he then offered to the man named Rob. Wednesday, Mains posted a picture that he took with the man at the game on Facebook, also including a caption that is sure to warm your heart.

Speaking with Daniel O'Leary of NHL.com, Mains explained just how excited Rob was to be in attendance at the game.

"I don't think it set in with him that we were going to the game until we went through the gate and through the metal detectors," Mains said. "He told me he had never been inside (the arena), only outside."

"During the anthem, he stood there and sang every word," Mains said. "He was yelling and cheering the whole game. It was just great to see a guy, who is obviously a little down on his luck, so happy."

Mains then went on to explain why he offered Rob the ticket and why he decided to share the image of him and his new friend on his Facebook profile.

"My parents always taught me to treat everyone how you wanted to be treated," said Mains, a newly minted police officer in Rankin, Pa. with one month on the job and former volunteer firefighter. "And if you have the opportunity to help someone, you do it. Just because someone is out on the street, doesn't make you any better than them.

"I posted (the picture) on Facebook just because there is so much negativity on there now. And this was a positive," Mains said. "He told me I made his life. Just by being nice to him."

The Penguins went on to win that evening, but quite clearly the biggest winners on the night were Jimmy and Rob who formed a new friendship, bonding over the game of hockey. Truly a warming story.