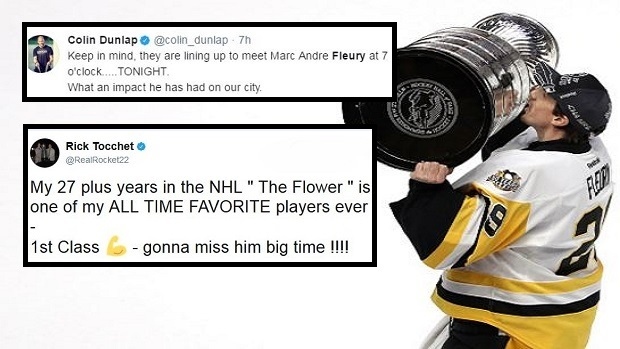 The Vegas Golden Knights’ roster is still a secret, but everyone within the hockey community believes that Marc-Andre Fleury is going to be one of the three goalies that they select.

Despite having to hear the rumours on a daily basis, Fleury held his head up high and showed nothing but class as his days with the Pittsburgh Penguins started to wind down.

This past weekend, Fluery and his family unveiled a playground in Pittsburgh that they were leaving behind as a donation to the city and the children in the community.

The playground is open! Thank you Fleury for this wonderful playground #Project29 @BGCMA_Clubs pic.twitter.com/tu4Lk5C3SA

Last week, the 32-year-old former 1st overall pick had to hold back tears during the team’s locker clean out before he went around the room to shake everyone’s hand.

When locker clean out day was over, every member of the media lined up to shake Marc-Andre Fleury's hand. He's in a class of his own.

With Vegas set to announce their roster on Wednesday night, Fleury made one final stop in Pittsburgh to say goodbye to all the loyal fans who had his back since the day he joined the team.

At 7 PM ET on Tuesday night, Fleury is going to be signing autographs one last time in Pittsburgh at a Dick’s Sporting Good and fans wanted to show how much they appreciate him and everything he did for their community by starting the line 12 hours in advance at 7 AM ET.

These are people camped outside of a Dick's Sporting Goods to potentially meet Marc-Andre Fleury at 7 o'clock TONIGHT. Unbelievable. https://t.co/qrqOAei3pb

Considering that photo was taken early Tuesday morning, the line is going to be at least a couple of thousand people deep by the time they get to meet him.

Keep in mind, they are lining up to meet Marc Andre Fleury at 7 o'clock.....TONIGHT.
What an impact he has had on our city. https://t.co/1WFrKRAtBe

Everyone who has encountered Fleury has nothing but good things to say about him and Penguins assistant coach Rick Tocchet said this about his soon-to-be former goalie.

You can expect Pens fans to give Fleury a standing ovation the first time the Golden Knights play in Pittsburgh (if that's where he ends up).