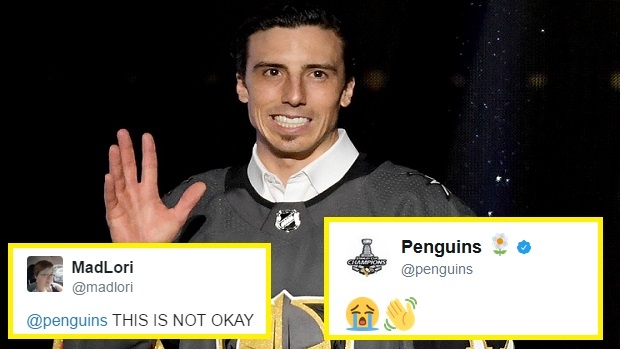 The moment a majority of Pittsburgh Penguins fans were dreading has come and gone and Marc-Andre Fleury’s time with the team has come to an end.

Selected by the Vegas Golden Knights in the Expansion Draft on Wednesday night, Fleury is off to a new city for the first time in his 13-year NHL career.

Minutes before he was officially selected by the Golden Knights, Penguins centre Evgeni Malkin shared a photo on his Instagram account letting his former teammate know he’s going to miss him.

No one is more upset about Marc-Andre #Fleury joining the #GoldenKnights than Evgeni #Malkin. . #Repost: @e.malkin71geno sad day (((

Following the announcement, the Penguins Twitter account shared a photo of their former goalie in his new threads, and it’s safe to say they were not a fan of what they were looking at.

THIS IS NOT OKAY

...and then he ripped open his jersey and revealed the Penguin tattooed on his chest, forever.

Fleury got a loud ovation when his name was announced on Wednesday night and Sidney Crosby gave his former teammate a pretty awesome recommendation.

Sid on Fleury: "He's going to be so important for their team w/ his experience & the kind of person he is. You couldn't have a better guy."

Let the crying continue. Here's a quick look at Sid and Flower hugging it out. pic.twitter.com/AXClpEutJ5

You can bet Fleury is going to get a massive standing ovation when the Golden Knights visit the Penguins next season.