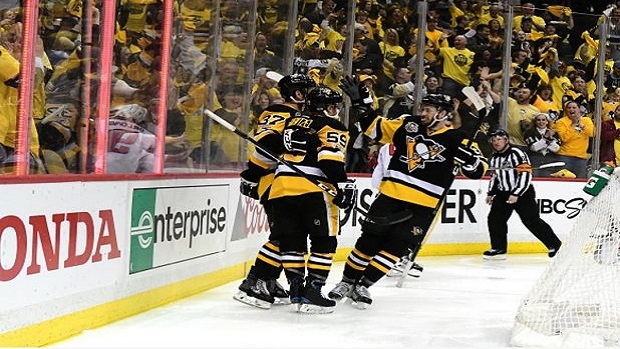 A lot of people counted the Pittsburgh Penguins out when they found out that Kris Letang would be out for an extended period of time due to a neck injury, but they’ve managed to prove all those people wrong through their first nine playoff games.

Evgeni #Malkin notches three assists as the #Penguins close out their series with #Columbus. . They will play the winner of the Capitals/Leafs series in Round 2.

FINAL: Justin #Schultz's second period goal gives the #Penguins a 3-2 win and a 3-1 series lead over the #Capitals.

Even without Sidney Crosby, they managed to get the job done on Wednesday night thanks in part to everyone stepping up when needed.

Through the Penguins’ nine playoff games this year, one of their biggest contributors has been rookie Jake Guentzel.

The 22-year-old has eight goals and is tied with Phil Kessel for second in team playoff points with 12. On Wednesday night, he added to his fantastic postseason with a goal and an assist.

GOAL! GUENTZEL (with a little help from the competition). 2-0 with 16:09 left in the 2nd period. #PARTYHARD pic.twitter.com/WIdap2GzA4

With his goal being the 8th of the playoffs, he joined some legendary company on a very short list.

Richard. Gretzky. Lemieux. Guentzel. That's the list of players with eight or more goals in their first nine playoff games.

Maurice Richard, Wayne Gretzky, Mario Lemieux and now Jake Guentzel. Even if the Penguins don’t go on to win the Stanley Cup, that’s still something to be very proud of.

It's not even Rd 3 yet, but Jake Guentzel already having an outstanding playoff year for a rookie that's 1 of the best by an American rookie pic.twitter.com/oduvl5Coon

Aside from joining legendary company, the Omaha, Nebraska native has more goals than any other rookie has points throughout the playoffs.

The More You Know 🌈⭐️ →@jakenbake20 has more goals than any rookie has points this playoffs.

He has been INCREDIBLE. pic.twitter.com/wDk8iJ4aLN

You need everyone to contribute if you want to make a run in the playoffs and Guentzel and the Penguins are proving that with every victory.