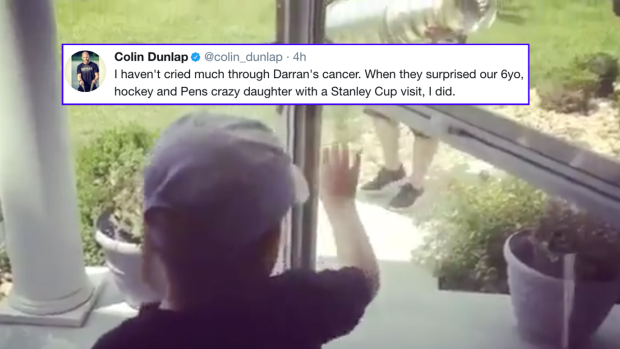 my daughter's body is crushed by chemo but she won't let me carry her up steps to bed. "I'll make it,"she says each night-and does. so tough pic.twitter.com/4xe9VecqI0

Ever since she was diagnosed, some of Pittsburgh's iconic athletes have reached out to support Darran in her battle.

No matter which team you root for @JamesConner_ is someone you root for.
Thanks for giving a 5yo so scared a bunch of hope.
You're a hero. pic.twitter.com/7g4NbeAVdR

In fact, back in March, Mario Lemieux reached out to Darran by writing her an incredibly heartfelt letter.

This came to our home today 100 percent unsolicited.
You talk about class?
Mario Lemieux is the height of class. pic.twitter.com/ba5eFM751d

The support and surprises from the Penguins continued on Saturday as Penguins equipment manager Danny Kroll surprised Dunlap and his family by bringing the Stanley Cup to his house.

I haven't cried much through Darran's cancer. When they surprised our 6yo, hockey and Pens crazy daughter with a Stanley Cup visit, I did. pic.twitter.com/E2nYSo1FF2

What a special and unforgettable moment for Darran and her family.

We're confident when we say so many people out there, including us, are supporting and wishing the best for Darran. She's an inspiration and a fighter.