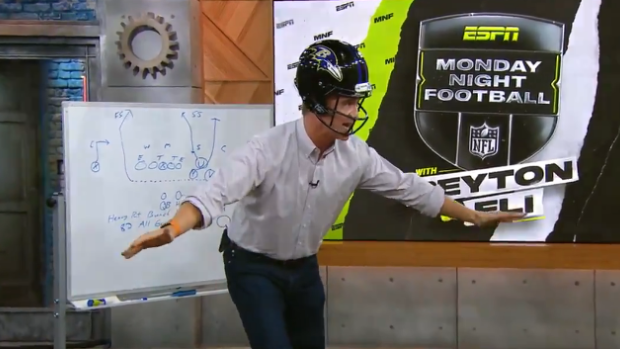 Peyton Manning and Eli Manning are making their duo broadcast debut on Monday as the Las Vegas Raiders take on the Baltimore Ravens. Featured on ESPN 2 (and TSN3 in Canada!), the Manning brothers provided commentary and analysis as the Monday Night Football game unfolded.

Most of it was done for the hilarity, but there was one moment that didn’t appear to be scripted that may have been the highlight so far.

While analyzing the game, Peyton decided to slip on a Baltimore Ravens helmet. The only issue is, the helmet was just a LITTLE too small…

Of course the helmet doesn’t fit… 😂

Anyone that has followed football for a while knows that Peyton Manning is known for his massive forehead. It’s a gag that he is always down to play into, so it slipped in very nicely to this Monday Night Football broadcast.

Peyton Manning’s forehead is so big a Ravens helmet couldn’t even fit him pic.twitter.com/0SpaeH7xhC