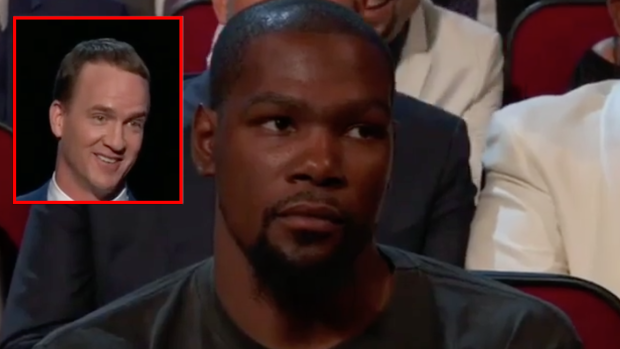 As is with every awards show, the host usually tells jokes and makes fun of some of the people in the audience.

Wednesday night at the ESPYS, Peyton Manning had the honour of hosting the 25th edition of the award show and he took aim at a lot of athletes in unique ways.

One of those athletes he made a joke about was Kevin Durant, and it was one he's heard multiple times since leaving the Thunder.

#PeytonManning roasted #KevinDurant in his opening monologue at the #ESPYS and KD wasn't amused. (Video via @sportscenter)

Durant's reaction says it all, and while his mom genuinely laughed it off, he was not having any of it, nor was his former teammate Russell Westbrook

We imagine nobody watching at home or in the crowd felt comfortable about the joke, but it was all in good fun and at the end of the day, Durant stayed true to himself and won a title (and Finals MVP) while Russ won the league MVP for the first time.

This one is really special to me...#StillKD doc is up now @YouTube! https://t.co/9A6P1uRBUR