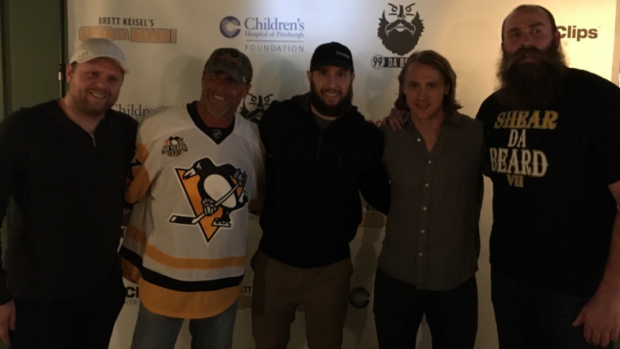 There were many incredible stories from the Penguins' 2016 Stanley Cup run, but the one that stood out among the others for us was the emergence of the 'HBK' line.

Carl Hagelin, Nick Bonino and Phil Kessel were incredible during the playoffs, and an argument could be made that Phil should have won the Conn Smythe.

The Cup wasn't the only thing the 'HBK' line helped bring to Pittsburgh, though.  They also brought WWE Hall of Famer Shawn Michaels, also know as HBK (The Heartbreak Kid) to a game once he found about the line and watched the team play during the playoffs.

While Michaels went to a game during the postseason and cheered for the Penguins on social media, he didn't meet the "HBK" line during the playoffs.

That changed Monday, though, as Michaels finally met his line at Brett Keisel's annual fundraiser.

Unbelievably thrilled to have finally got to meet the #HBKLine tonight !! Already a great night!! #ShearDaBeard pic.twitter.com/pKk1RfBMXR

The fundraiser for the Children's Hospital in Pittsburgh featured Kessel, Bonino and Hagelin shaving Keisel's beard.

An auction also took place to raise money, and James Harrison of the Steelers was the auctioneer.

But before we #ShearDaBeard... @jharrison9292 shows us his auction skills. pic.twitter.com/5PL1VtpyiW

We're glad The Heartbreak Kid and the "HBK" line finally got to meet for such a good cause.

With the playoffs quickly approaching, it's probably fair to expect they'll meet again somewhere down the road as it seems Michaels is fully invested in his fandom for the Pens.