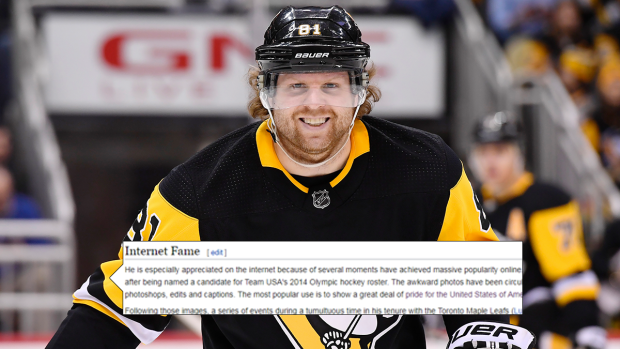 Across the internet, you can find congregations of hockey fans who celebrate Phil Kessel to an extent that goes well beyond any hockey player.

In the past, we’ve written about the Temple of the Phil and several other oddities in the hockey community that celebrate the unique characteristics he brings to the elite level of the NHL, and now it appears to fully be a part of Phil’s story. Scrolling through his Wikipedia page, we noticed a section that we have never seen on another player’s page titled “Internet Fame”.

Looking back at the edit history of the page, it appears as if a user by the name of “NHLStories” added this section on March 2, 2018 and other than a few minor edits to remove subjective material, it has remained untouched.

Here it is in its current state:

He is especially appreciated on the internet because of several moments have achieved massive popularity online. One of the first moments came in August 2013, when he posed for photos after being named a candidate for Team USA's 2014 Olympic hockey roster. The awkward photos have been circulated around hockey forums, social media and other fan sites with different photoshops, edits and captions. The most popular use is to show a great deal of pride for the United States of America.

Following those images, a series of events during a tumultuous time in his tenure with the Toronto Maple Leafs (Lumberjack swing at John Scott, Penalty box selfie, /r/TempleOfPhil subreddit, "This guy's such an idiot", fake hot dog article) turned him into an anti-hero for hockey fans. He was eventually traded to the Pittsburgh Penguins and the gap between how traditional hockey minds and hockey fans valued Kessel's abilities hit an all-time high. He was left of off Team USA's 2016 World Cup of Hockey roster and on the night that the team lost to Team Canada, he shared a tweet suggesting that he would have given the team a better opportunity to win.[46]

That's where things seemed to turn for Kessel - later that year, he won his first Stanley Cup (After being pegged by many as the reason that the Leafs wouldn't win[47]) and was celebrated by most of the hockey community, earning him the nickname "Stanley Cup Champion Phil Kessel". Obama even used the phrase when the Penguins came to visit the White House.[48]

Kessel then captured the attention of hockey fans by bringing the Stanley Cup that he won in Pittsburgh back to the Toronto Sick Kids hospital.[49]

He has since continued his ways of breaking hockey internet with moments like printing "Phil Kessel for President" shirts when Donald Trump was running for office, laughing hysterically after Pierre McGuire asked him about his breath, winning a second Stanley Cup (updating his nickname to "Two-time Stanley Cup Champion Phil Kessel"), eating hot dogs out of the Stanley Cup (A reference to the fake hot dog article mentioned above). TSN even made a video essay about him called "The Tao of Phil".[50] The sky is the limit for Kessel, as he appears to have no fear in the hockey world. He even went as far as challenging 6'9" Zdeno Chara to a fight, earning him his latest nickname "Giant Killer"."

Here are our key takeaways:

It also looks like the section was even more legendary before the latest edits. On March 6, someone removed some bullets from the bottom of this section titled “Other Viral moments”. They included these five bullets and links to the videos:

This has to be the best Wikipedia page ever.